Chinese steel mills are operating at less than 70% capacity but are still churning out 820 million metric tons of steel annually.

China’s apparent steel consumption, however, will fall toward the 500 mmt per year range by 2020, according to Terance Ko, Hong Kong-based Director of Consulting for Hatch Associates at the Platts Steel Markets North America conference last week in Chicago. 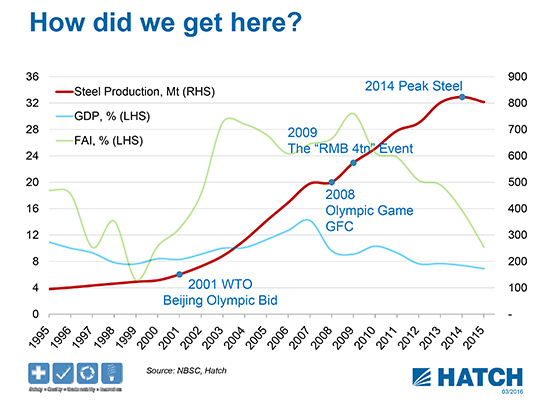 Ko gave a lengthy talk describing market conditions in China and what role the central government there played in creating the overcapacity problem, which is lingering after an aggressive stimulus plan was created in response to the 2008-2009 global financial crisis.

The Origin of Chinese Steel Overproduction

His explanation of how overproduction started said it began with the 2008 Olympic bid. Ever since the bid was announced, and then won, Chinese steel production has increased about 15% every year. No other nation could have produced that much steel and Ko said that much, honestly, was needed for the rapid industrialization necessary to prepare for the Olympics.

Around quarter three of 2006, the Chinese Government finally figured out that things were growing too quickly. There was a deliberate decision to slow down the steel industry. If the global financial crisis hadn’t happened, peak steel in China would have happened around 2009. Instead, in 2009 Beijing pushed 4 trillion RMB into the market and steel production continued.

From there, the subsidies continued. In the first 3 quarters of 2015, 34 listed companies received subsidies from the government, totaling more than 2.6 billion RMB

Some steelmakers turned losses to gains because of these subsidies.

Where Do We Go From Here?

Now, up to 150 mmt of steelmaking capacity is planned to be eliminated in the next five years, with financial support from Beijing of $15.4 billion (100 billion RMB).

Even that might not be enough to curtail overproduction, Ko warned. By 2020, China will have approximately 400 mt of excess rolling capacity. Mainly long products and other construction-related products will be produced from this capacity.

China is now committing to let private companies fail, mostly those with capacity of less than 2 or 3 mmt. Steel exports might go down by a million tons or so, but nothing that will move markets in a big way, Ko said.

There was some positive news about China’s steel industry, though. Cleaner technology is being embraced by both steelmakers and the government. Ko said forecasts are showing China’s percentage of electric arc furnace (EAF) market share is rising from its current low adoption rate of 7% to as high as 30% by 2030. Ko said the shutting down of smaller operators and green mandates will help push the shift.