China’s Increasing Corporate Debt a Cause for Concern

China has a problem. Well, like the rest of us, it has many problems, but a major one is debt.

It is not a secret that China’s phenomenal growth was achieved on the back of phenomenal levels of investment. In the latter part of the last century, and early part of this, that investment paid off with rapid growth and an unprecedented rise in living standards for hundreds of millions of people but, over the last ten years that, investment has shown progressively poorer levels of return and the country is now saddled with hugely indebted corporations, falling growth and banks with growing levels of unpaid loans. Loans that privately many admit will never be repaid.

We wrote this week about Bohai Steel Group and it’s likely default on part or all of its nearly $30 billion in debt. The Bohai Group is not alone as a recent article by Bloomberg explains. 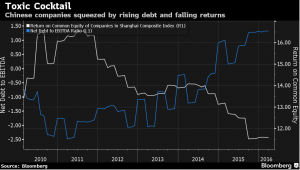 China’s big corporate entities were already overstretched. According to Bloomberg, record corporate debt levels have left many firms struggling to meet their basic liabilities, with corporate insolvencies jumping by 25% in 2015, quoting Euler Hermes.

The trade credit insurer sees another 20% increase in Chinese bankruptcies this year, the most among 43 major markets. As major firms struggle to meet bank debts, their suppliers are being left even further behind.

As accounts receivable at the nation’s public firms have swelled by 23% over the past two years to about $590 billion, cash collections are out to 83 days and rising. Steel and raw material manufacturers may be some of the highest profile examples but debt is becoming a major problem across the whole Chinese economy.

The median collection time of 83 days, according to Bloomberg, has climbed from 79 days in 2014 and 55 days in 2010. It’s higher than in any of the world’s 20 biggest economies except (you guessed it) Italy, and compares with the 44-day median for companies in the MSCI Emerging Markets Index.

The cash flow burden is immense. Chinese industrial firms take the longest to convert sales into cash, at 131 days. Technology companies are not far behind at 120 days, followed closely telecommunications firms at 118 days. While it varies by sector, a reading of more than 100 days is typically a “red flag,” says Bloomberg quoting experts in the US.

Such extended payment and onerous cash flow burdens exacerbate low profitability as a number of customers for whom material is taken in or production started will likely fail before cash can be received, forcing firms to make provisions in their accounts for non-receivables.

One of the worst cases quoted by the newspaper is a company called China First Heavy Industry based in northeast Heilongjiang province, making industrial equipment. The firm took 1,260 days to secure cash from sales during the year up to last September — up from 490 days a year earlier.

Not all Chinese firms are in this position. A few are actually improving, especially those dealing in a more retail environment, but Bloomberg’s article underlines the challenge facing corporate China, so long reliant on state- and shadow-banking debt to fuel profits in a high-growth environment. As growth slows to more sustainable levels those debt levels are becoming progressively more of a burden. It could be that, as in the banking crisis in the west, the state will eventually step in and offer some form of debt relief but, before that happens, many more Bohai Steel-type crises are likely to arise.