With the stock market in a funk and property prices rising fast in China, some Chinese investors are turning to iron ore futures trading to make a fast profit.

The chart below, from Westpac, shows the daily traded volume of Chinese iron ore futures on the Dalian Commodities Exchange back to when the market first came into existence in late 2013. 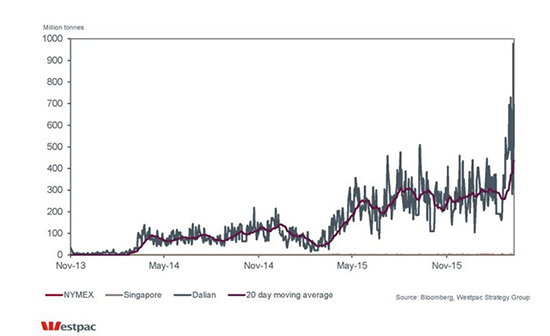 It’s not the first time the Chinese market was swayed more by sentiment than reality.

Monitoring daily price movements in the domestic Chinese market (sign up for membership in our IndX if you would like to receive daily prices) gives MetalMiner the opportunity to keep a finger on the pulse of the country’s metals market, so when our editor, Jeff Yoders, remarked on the fluctuating daily prices for iron ore and coal on the Dalian exchange last week, we thought some of our readers may likewise by intrigued to know what is going on.

After all we have been told for much of last year that the iron ore market is massively oversupplied and destined for years in the doldrums. None of the major producers seem in the least intent on curbing output in the interest of raising prices, preferring to take the path of squeezing out higher cost production both within China and from smaller Australian, Indian and African challengers by driving prices down to the point where they cannot compete. So, rising prices this year caught many commentators and not a few buyers unaware.

Iron ore has been up some 30% since its lows in December. On the Dalian exchange, the May contract is the most active iron ore futures contract. It surged as much as 5% to an intra-day high of 454 yuan a metric ton, (nearly $70) this month, its highest since Jan. 16, 2015, before falling back.

Since then, the price has oscillated wildly but the trend is definitely down in recent days. So, why would that be? What drove the price up this quarter and what, now, is happening to make it fall back?

China Gets Serious About Overproduction

Well there have been three major developments all centering around China which have helped iron ore prices move higher, and, yet at the same time, have held the seeds of a price collapse.

First, after years of talk and several false starts, Beijing finally seems to be trying to grapple with overproduction in the steel industry. The government has pinned its colors to the mast saying it will bring production capacity down by 12% and, as a result, is preparing for the loss of about 500,000 jobs over the course of the next few years. The market has taken that as a sign that supply will be more restricted and mills will be able to command higher prices.

At the same time Beijing has announced it will provide fiscal stimulus to ensure GDP growth remains around 6.5% over the next five years. The market has taken that to mean investment in infrastructure may increase this year.

Finally, believe it or not the most significant fundamental development to impact current supply and demand is a flower show.

The Tangshan Flower Show in steel-producing Hebei province will fall between May and October this year. Steel mills have been asked to halt production between April and October in order to allow a pollution-free environment.

So, to compensate for the lost production rising from a temporary closure of the steel mills, the city has urged steel producers to ramp-up production over next two months. As marginal domestic iron ore producers closed last year, the market has become more dependent on imports, limiting supply options in the short term and making the price more sensitive to short-term demand surges.

As a result of these three developments, some driving sentiment and some driving physical short-term buying, prices for both iron ore and coking coal have risen on the Dalian exchange.

The question is, will it last? The answer is no. In fact, prices have already begun to come off, down 2-3% in recent days as both steel prices and raw materials have responded to the flat demand landscape and the realization that the market for finished steel is well supplied with substantial inventory.

Still, it does illustrate what a volatile market iron ore and coking coal could be this year. Although we expect prices to now fall back they will continue to show price swings and further politically influenced or policy-driven price spikes are not only a risk, but a probability. This may be good news for speculators looking to sell spikes and buy dips, but it’s challenging for consumers or those looking to hedge steel prices by correlating with raw materials.