Home | Commodities | Will Copper and Oil Lead a Commodities ‘Rush for the Exits?’
Commentary

Will Copper and Oil Lead a Commodities ‘Rush for the Exits?’

A note issued by Barclays recently told customers that, although investors have been attracted to commodities as one of the best performing assets so far in 2016, returns are unlikely to be sustained in the second quarter of the year.

“This could make commodities vulnerable to a wave of investor liquidation that we estimate could, in a worst case scenario, knock as much as 20-25% from current price levels,” the note to investors said.

Copper and Oil Under Pressure

This would take the price of oil back to the low $30s per barrel and copper to the low $4,000s per metric ton, the analysts said. Channeling its inner bear, Barclays said that the recent price appreciation does not seem to be founded in improving fundamentals, and that the key markets already face overhangs of excess production capacity and inventories.

Net flows of investment into commodities totaled more than $20 billion in January and February, the strongest start to a year since 2011.

“The kind of commodity investment that is taking place currently is not the long-term buy-and-hold strategy for portfolio diversification and inflation protection that underpinned the huge inflows of the previous decade,” the Barclays note said. “It is much more short term and opportunistic, as is clear from the relatively short holding period for (exchange traded product) buyers in oil. Many have been liquidating on the recent move up in prices, having held their positions for only 5-6 weeks.”

The UK investment bank goes further to say both copper and Brent crude could fall by as much as a quarter of their current positions if a mass selloff occurs. The following chart illustrates the precarious position that both commodities find themselves due to recent speculation. 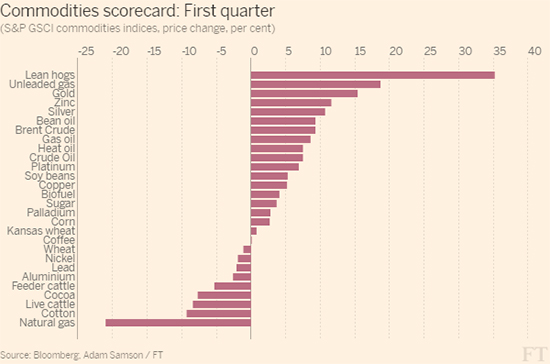 This could easily be dismissed as a the overly cautious forecast of a single investment bank, but it’s not just Barclays. UBS is also warning its investors about short-term swings and, in some ways, is going beyond the Barclay brothers’ analysis in telling them that commodities may be more susceptible to chaotic swings than ever before.

“Changes in the direction of global risk appetite are now occurring more frequently than they did from 2010 to mid-2014, making it increasingly difficult for investors to participate meaningfully in either direction,” UBS wrote. “Although risk sentiment has settled into a tighter range since 2012, it has nonetheless become less persistent — it tends to change direction quicker than it did in the past. The time length of risk cycles — the lag between two crests or peaks in the 13-week change of the risk premium index has gone from 9 months to a year in the period 2012-2014 to three-to-six months today.”

This might create more opportunities for commodities traders, but it also means a more volatile environment for metal buyers, particularly those buying copper.