Tata Steel Exits the U.K., Why It’s a Self-Inflicted Wound

It would be easy to blame China, and certainly Chinese exports have had a severe impact on the economics of steel production in the U.K., specifically and Europe in general, but the story of Tata Steel exiting the U.K. market is much bigger.

News last week that India’s Tata is going to close its giant Port Talbot steel plant if it cannot find a buyer would all but bring steelmaking in Britain to an end. Once supplier of 40% of the world’s steel, production in the U.K. has fallen both relative to global production and in absolute terms for a number of reasons, not just Chinese competition.

Why Buy Port Talbot in the First Place?

First, it must be said it was insanity for Tata to buy the old Corus steel assets in the first place, or if not insanity to buy them then insanity to pay the price they did. Tata paid $9.5 billion (£6.7 billion) back in 2007 for the merged British Steel of the U.K. and Hoogovens of the Netherlands company rebranded as Corus.

Tata will claim it couldn’t have foreseen the financial collapse of 2008 just around the corner but the company got into a bidding war with CSN of Brazil for Corus and ended up paying 50% more than it had started out with when it first mooted the deal.

Even at the time, most of us thought, “why buy aging assets in a mature market like Europe when you have an economy at home expanding three times as fast?”

Nevertheless, buy it they did and in the process saddled themselves with a mountain of debt and huge pension fund liabilities. For a short while, as global steel prices rocketed in response to China’s stimulus package stoking the construction sector, Tata made money, but it could never last and now the firm is racking up over $1.4 million (£1 million) per day in losses. The London Telegraph reports Tata has invested the thick end of $2.8 billion (£2 billion) in its British production facilities — previously the victim of decades of under-investment — including, as recently as eighteen months ago, $264 million (£185 million) in a new blast furnace at Port Talbot. Lack of investment has not been the problem; in large part it has been government policies.

The government has been more concerned about its green credentials — as if the rest of the world takes the slightest bit of notice — and kowtowing to Chinese investment in British nuclear power and attracting offshore trading rights for the renminbi for London’s banks. 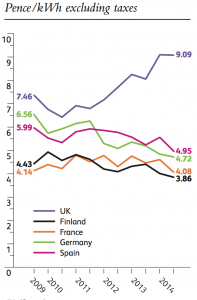 The result has been the highest power costs in Europe — already some of the highest in the world — and Britain’s reluctance to back higher European import tariffs on Chinese steel. On the flip side, they may argue the country benefits far more from access to cheap steel imports than it would from having higher-cost domestically produced steel but it is not an either/or situation. In the U.S., tariffs are used to protect domestic producers from the worst effects of dumped prices, yet consumers still enjoy competitive steel prices.

China has no natural advantages to support it’s claim that export prices for its steel cover the cost of production. The country imports iron ore, coking coal and has high power costs. Modern steelmaking is not a labor-intensive business and labor costs have risen substantially in China since the turn of the century. Domestically produced iron ore and coal are high-cost items as evidenced by the losses made by domestic producers and resultant closures of mines in the face of relentless Australian imports. Britain imports more steel from Europe than from China but Chinese competition drives down the price for all producers, in Europe and globally.

Steel imports into the UK from the rest of the EU cost on average $1,020 per metric ton (€897 per mt) in 2014, while Chinese steel imports were just $663 per mt (€583 per mt), the BBC reported, quoting the EU’s statistics agency, Eurostat. So Tata — which is currently closing and selling off both hot end and downstream facilities — after SSI closed Redcar last Fall and Caparo that fell into receivership earlier this year are part of a wider story that can in large part be laid at the door of government policy.