Tin: Plenty of Energy Storage Potential From a Versatile Metal

New technologies can revolutionize the demand landscape for materials, just witness the demands created on lithium supply by the relentless growth of lithium-ion batteries, a trend that many believe has only just begun with the imminent advent of the mainstream electric car.

New technological developments can also dramatically affect the demand picture for already well-established metals such as the impact automotive lightweighting has had on aluminum demand, spurring massive investment in new rolling mills and lifting annual demand by significant percentage points.

The impact on market balance is most acute in those markets where the supply side is already constrained, so a recent presentation by the ITRI about the effect on tin demand that developments in energy-related research and development makes interesting reading, as it is widely held that tin’s recent performance has much to say about its constrained supply position. This graph from ITRI illustrates the upturn in price coupled with the dwindling stock levels. 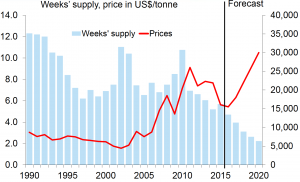 Tin supply from traditional producing areas is declining, in part due to self-induced restrictions imposed as part of a wider policy to encourage more domestic refining and better environmental practices in longtime major exporter Indonesia. Also in part due to low prices that have forced miners to halt much exploration and development until such time as prices rise.

In truth, global tin resources are more than adequate to meet long-term demand but if they are not economically viable to develop and extract at current prices then they will stay in the ground until such time as market tightness forces prices up to more supportive levels.

Current tin applications are broadly stable in terms of technological change. The ITRI believes that the time is right for more tin development with the rising demand from electronics, particularly following the switch to lead-free solder now a well-established part of the demand landscape. 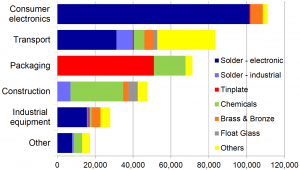 The trade body has identified several technological developments that it feels could be truly disruptive to that situation, spurring tin demand in ways not currently considered. The hot topic in the energy industry is, in many ways, not how to produce energy but how to store it, spurred by the rise of intermittent power sources such as renewables and regeneration technologies in the transportationa industry.

Tin, apparently, has several potential applications in making even the humble lead-acid battery more productive by its inclusion in anodes. In China last year, nearly 12,000 metric tons of tin were consumed in lead-acid battery manufacturing, improving the energy density.

Globally, this figure is now 26,000 mt and rising, making it the fourth-largest application for tin globally. But tin’s benefits are not restricted to lead-acid technologies, its inclusion in the anodes of lithium-ion batteries, magnesium-ion, sodium-ion and even fuel cells are all showing considerable promise in making those storage technologies more efficient.