Home | Commodities | Brave, New, Tin World: The Tech Applications for the Metal May be Limitless
Commentary

Brave, New, Tin World: The Tech Applications for the Metal May be Limitless

This is part two of a series on tin and its evolving uses in the many industries that purchase it. Check out part one, if you missed it.

It has been known for nearly 200 years that that a thermal gradient formed between two dissimilar conductors can produce electricity, but it has taken researchers at Northwestern University to show that tin selenide is such a poor heat conductor that it makes a remarkably promising thermo-electric material whose unique properties can be exploited in solid-state thermo-electric devices for a variety of industries, with potentially enormous energy savings. The US wastes 50% of the energy it produces as heat.

Two thirds of the energy in gasoline disappears out the tailpipe, imagine the reduction in generating capacity or in fuel use that could be achieved if a portion of this could be captured and used? Potential areas of application for such materials include the automobile industry, heavy manufacturing industries such as glass and brick making, refineries, coal- and gas-fired power plants, and places where large combustion engines operate continuously such as in large ships and tankers.

Touching back on our reference to energy storage, one of the technologies that has created the demand for storage more than most is solar panels. The cost has come down and the efficiency has gone up with silicon crystalline photovoltaic panels to the extent that they can operate without subsidy in southern states. But although costs have fallen, the smart money believes it has much further to go… and tin could be the key. 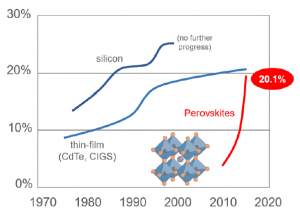 Research money is pouring into perovskite solar cells, which can be produced for a fraction of the cost of silicon solar cells in part because they do not need the high-tech, super -lean manufacturing environment that conventional silicon PV panels demand.

But early progress in using lead perovskite cells, while showing considerable promise, has raised concerns far and wide that the inclusion of lead would ultimately create an environmental and health issue.

Now, researchers in the U.K. have developed tin perovskite solar cells that are showing great promise as they are made more stable and long lasting by improved manufacturing processes. Commercial examples could be available within a year or two and promise to be not just more practical — they can be made more thinly allowing flexible substrates to be used but also more cheaply, dramatically expanding the possible applications.

It is difficult to say at this stage which of these developments will have the most dramatic impact on tin demand but if Honda is right in backing fuel cells — see our recent article — then maybe tin’s properties both in hydrogen fuel generation, ITRI says its produce hydrogen at 50% less than conventional costs, and in fuel cell design could be the greatest.

Researchers at the Los Alamos national laboratory have found tin pyrophosphate, that could potentially replace the proton-conducting polymer that forms the membrane in proton exchange membrane (PEM) fuel cells that, for the first time, permits the operation of fuel cells at temperatures of around 200-300 degrees celsius meaning expensive platinum catalysts would not be required because they don’t get hot enough and exotic metals would also not be required because they still run cool enough to house and contain the cells. It’s a veritable goldilocks of temperature ranges for automotive fuel cells.

Any of these developments could have a significant impact on tin demand, and the metal is already one of the best performers in the metal sector this year rising nearly 16% to date.

The London Metal Exchange cash-to-three-months period flexed out to $220 per metric ton backwardation in late February, meaning spot was at a significant premium to three months delivery, nearly always a sign of a tight physical market.

That backwardation sucked some metal into the LME warehouse system but at just under 5,0000 mt, registered inventory is still down 14% on the start of the year and cash was still commanding a $120 premium as of last night’s close.

Supply concerns seem to be the main driver of this price strength. Part of it self-inflicted by Indonesia but the wider background is of a market constrained by low prices and with only Myanmar showing increased output. Tin and zinc face the most significant constraints to their supply base of all the base metals, increased demand from new technologies will only exacerbate that looming tightness.