Well, we thought the world’s major oil producers would at least manage to agree an oil production freeze — that shouldn’t have been so very hard and was always a paper tiger anyway — the world is pumping far more oil than we need so a freeze effectively meant nothing in the short term.

The prospect of some kind of agreement, even one with no teeth like a freeze, has been supporting oil for the last few weeks in a rally that brought it to it’s year high last week. Following Sunday’s failure at the Organization of Petroleum Exporting Countries‘ sponsored meeting in Doha, Qatar yesterday prices have now gone into freefall again, falling over 7% in early trading this morning before marginally recovering. 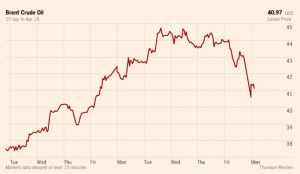 Once again, it was Saudi Arabia that took the hard line, after initially courting Russia and appearing to support the prospects of an output freeze it changed tack after the first draft of an agreement had been drawn up, apparently at the insistence of the 30-year-old Saudi Defense Minister Mohammed bin Salman, the desert kingdom’s deputy crown prince and second-in-line to the throne.

He is reported to have told Bloomberg that the kingdom would not sign up without Tehran, suggesting he had decided against giving any leeway to a fierce regional rival according to the Financial Times today.

Iran, who did not even bother to send a representative to the talks, had maintained all along that they would not be a party to an output freeze until their production had recovered to pre-sanction levels. The International Energy Agency estimates exports of Iranian crude oil rose to 1.6 million barrels per day in March — up around 100,000 bpd from February. Before sanctions were tightened in mid-2012, Iran was selling roughly 2.2m bpd of crude on world markets.

Other oil producers such as Iraq, Venezuela and Nigeria were bitterly disappointed, with budgets ravaged by low oil prices they had been hoping and expecting Saudi Arabia would rubber stamp a deal and the price could find a floor, if not climb higher. Now the question is how far will it fall. With only a strike among Kuwaiti oil workers that started yesterday likely to effect the downside oil, energy stocks and commodity-linked currencies have all dropped sharply this morning.

The news will be a mixed blessing in the U.S., shale oil and gas producers had hoped for a rebound in prices as many face potential bankruptcy this year as hedges expire and debt obligations become increasingly tough to meet, but consumers will welcome a halt to the rise in pump prices that a reversal would bring and energy-consuming industries will be viewing 2016 with a little more confidence.

The chances of OPEC pulling together the wider oil-producing community in a repeat of this weekend’s meeting before the end of 2016 are slim. OPEC, itself, is set to meet in June but the twelve-member organization lacks the influence it once had and needs the participation of Russia, Mexico and lesser producers to have a chance of moving market sentiment. So, somewhat to our surprise it looks like we are in for more of the same: lower for longer is the order of the day for oil.