The World Steel Association painted a gloomy picture of future global demand this week saying finished steel consumption this year is likely to reach just 1,487 million tons, a fall of 0.5% from last year… which, in turn, was 3% lower than 2014.

Just last October the association was predicting an uptick in demand saying consumption this year would be 1,523 million tons, so the reversal has sent tremors through and already depressed global steel market. 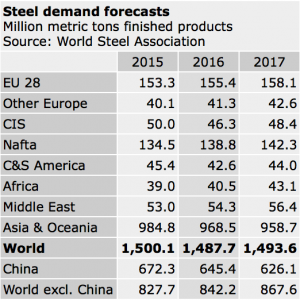 The countries that led the supercycle up 10 years ago are largely the same that are now leading it down. China, Russia and Brazil are all showing down, only India, of the old BRICS acronym, is boasting growth, the world’s third-largest steel consumer is still bucking the trend and on a roll. Indian demand is expected to rise by 5.4% both this year and next reaching 88 million tons in 2017.

Unfortunately for struggling established mills this decline in global demand is being met by chronic oversupply, particularly in China but a recent Reuters article poor cold water on any suggestion this is about to change soon. Regardless of Beijing’s promises, protestations and plans, the reality is China’s massive overcapacity took a long time to become this way and will take a long tome to solve, the newspaper reports.

Fearful of the social unrest that widespread closures and job losses would result in, both state governments and Beijing are likely to soft-pedal major restructuring plans.

“Closures can not be completed overnight,” said a person with ties to China’s leadership. “Stability is the top priority.”

To get a scale of the problem, Reuters explains that according to official data China’s production capacity is just over 1.1 billion metric tons a year although analysts estimate another 100 mmt are probably produced illegally. Official figures suggest surplus capacity is some 300-400 mmt a year, as consumption is is seen as falling 4% this year to 645.4 mmt and a further 3% in 2017.

Exports in 2015 reached a record 110 mmt — larger than the total consumption of the U.S.A., although comparatively little of it went directly to the U.S. the effect has been to depress prices globally. Although the China Iron and Steel Association (CISA) and some steel executives had predicted that exports would fall in 2016, Chinese customs data on Wednesday showed shipments soared 30% in March from the same month a year ago. Even as pressure mounts to close capacity new plants have continued to come onstream in China and CISA has warned capacity will actually rise this year.

In addition, banks will be forced to absorb substantial losses if firms are forced out of business. China’s rapid expansion of steelmaking, as with so much else, was entirely debt-fueled, yet plants have been at breakeven for several years. Those debts are simply rolled over at present, even though the underlying organization is, in some cases, technically bankrupt.

Mergers may allow the losses to be hidden and the can to be kicked down the road, and that probably accounts for Beijing’s preference to see the top ten biggest steel mills consolidate fully 60% of the country’s capacity by absorbing smaller rivals. Xia Nong, head of the industry department of the National Development and Reform Commission, the state planner, is quoted by Reuters as saying China’s “survival of the fittest” mechanism remained inadequate. “The fit are not strong and the unfit are not eliminated.”

As for global growth the WSA are pinning their hopes on the shaky premise of rising demand in NAFTA countries and the EU to see a return to global growth next year – well good luck with that.