If you had been asleep for the last month, woke up this morning and picked up a paper you could be forgiven for thinking you had been transported back to 2009.

Chinese construction is up 20% last month year-on-year, Chinese loans were up 41% last month, the government is raising exchange-margin requirements from 5 to 8% to dampen rampant speculative behavior, should we go on?

Turn to commodity prices, copper is up 20% this quarter, zinc is up 22%, iron ore has nearly doubled, hitting $70 per metric ton and a 16-month high according to Bloomberg. Steel mills in China, encouraged by rising prices and strong construction demand, churned out over 70 million metric tons last month, nearly equivalent to the entire U.S. annual output. Sound like the start of the supercycle to you?

Iron ore producers are trying to take credit for cutting back on expansion of iron ore mines and are indicating they would limit production to support prices, but, in reality, they are tinkering at the margins.

Price gains, flatfooting nearly all of us, have been driven by a sugar rush of stimulus investment by Beijing, the question (the same one we faced back in 2009 it must be said): is this temporary to provide some short-term relief or is it medium- to long-term stimulus to give the steel industry time to restructure?

In 2009 it went on for more than two years, at present we have no way of knowing how long Beijing will keep this up but if you ask Goldman Sachs its analysts say the iron ore price is coming back down.

The investment bank is reported in Bloomberg as saying rising iron ore supply — not so much from Rio Tinto and BHP Billiton but from others encouraged by higher prices lifting the industry above the cost curve — as inflating the oversupply position. Goldman quotes Citi in saying iron ore cargoes from Australia may rise 10% to 846 mmt this year as Roy Hill ramps up, while Brazilian exports will gain about 7% to 393 mmt.

Increased supply will weigh on prices whether China’s stimulus perseveres as a more permanent feature or fades in the coming months. It must be said, until just a matter of weeks ago, Beijing was saying that China’s past investment-fueled growth had led to bad investments, lower productivity and a heap of debt. 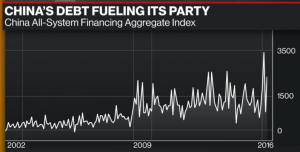 For Beijing to embark on a long-term policy of yet more of the same would seem like madness, especially as it has the means at its disposal to retrain and relocate displaced workers from the steel and coal industries most directly impacted by a more rapid rationalization of those industries.

Unless the party is worried about a wider slowdown in the economy, unless they have data that suggests GDP will fall faster and lower than projections during this five-year plan, such a loss of face may justify the more extreme step of piling debt on debt to stimulate the economy. It is too early to call. If you believe Goldman we will be back to $35 per mt iron ore by the second half of this year, but with steel and scrap prices rising globally, that would be a brave call.