The Financial Times wrote this week that a key driver of bullish sentiment for many asset classes, particularly emerging markets and commodities, has been the U.S. Federal Reserve lowering its estimate of policy tightening this year, but for metals the knock-on effect of that has been a weaker U.S. dollar which — as my colleague Raul De Frutos has written recently — remains a key driver of both price direction and sentiment.

Equally, if not more important, though, has been the sugar rush of China’s not-so-mini fiscal stimulus, initiated late last year which has really picked up momentum in the first quarter. Across a number of metrics, China’s economy has surged this year driving a risk on sentiment among investors, the strength of which has caught many by surprise.

Chinese speculative investors have piled into the country’s commodity markets betting the upturn has the potential to boost demand for those materials. Wider sentiment has helped, according to the London Telegraph, new home sales jumped 64% in March from a year earlier. Housing prices have risen 28% in Beijing, 30% in Shanghai, and 6% in the commercial hub of Shenzhen.

The rush to buy has even spread into the tier 2 cities such as Hefei — up 9% in a single month. Wei Yao, from Societe Generale is quoted by the newspaper, “The housing market is on fire, in the first quarter, increases in total credit exploded to 7.5 trilion Chinese yuan (CNY), up 58% year-on-year. There is no bigger policy lever than this kind of credit injection.”

But, as we wrote last week, this is exactly the kind of old-style, credit-backed investment-driven boom that we had in 2009 and that resulted in worrying levels of debt and the creation of bubbles. Not just in China, but around the world as China’s impact on various asset classes rippled out.

Prices of metals have risen as demand for steel, base metals and cement have surged. Cement production rose 24% in March, infrastructure investment 19%, but already firms such as Morgan Stanley are warning that, while the recovery may last another three-to-four months, it is nearing its peak and the bank is expecting a slowdown in the second half of the fiscal year as the stimulus fades.

That has implications for metal prices. Investors will not be ignorant of these unfolding events, nor will the rise in supply that is accompanying this sudden surge in demand go unnoticed. The most-traded aluminum contract for June delivery on the Shanghai Futures Exchange rose as far as 13,075 CNY ($2,010) a metric ton, its strongest since July 2, 2015.

According to Jackie Wang, an analyst at CRU in Beijing 1.47 million metric tons of aluminum smelting capacity may be restarted this year in China due to the stronger prices. If, as expected, demand begins to wane again that could bring prices back down in short order. Wang believes a ceiling of about 12,000 CNY is seen as the likely limit as restarts boost supply and hinder prices staying above that level for long.

The Overall Trend is Down

The Economist, this week, ran an article along similar lines, it said since early 2012 Chinese growth has been trending downward despite a rapid sequence of ups and downs. 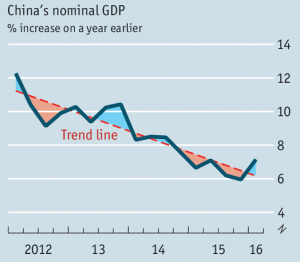 The force behind these fluctuations is on-again-off-again policy support from the government. the Economist says. Precisely like the recent series of policy incentives that have fueled the property rally outlined above. Total new credit rose by 42% in the first quarter compared with a year earlier, the biggest increase in three years, and ultimately unsustainable if China is to come to grips with its debt issues.

Meanwhile, commodity prices have soared on the back of this upturn in demand, however temporary it may pan out to be. Aluminum is not alone, of course, if analysts are right and the effects of the stimulus measures fade, so, too, could significant support for prices of steel, iron ore and other commodities. We are not calling an end to what looks like a mini bull run in metals, not yet, but we are suggesting caution may be in order.