As if to underline just how much of the recent froth in commodity prices has been speculative, it took nothing more than a tightening of rules to bring the market off the boil.

Iron ore, steel and non-ferrous metal markets in China — and by association the London Metal Exchange after opening — dropped following a decision by futures exchanges in Dalian, Shanghai and Zhengzhou to increase trading margins and fees. The most-traded contracts were down up to 4.6% in response.

Some Commodities Are Actually in Short Supply

Not all commodities dropped. Some experienced genuine supply tightness, such as coking coal wherein many of the domestic mines and ovens closed last year due to low prices, and bucked the reversal. Coking coal continued to rise and although iron ore did fall back. The fundamentals are a little more supportive following announcements by producers that they will limit output, but, in truth, even iron ore’s price increases are more due to speculative bullishness than a genuine tightness of supply.

Steel prices though, in spite of massive overcapacity, are rising largely as a result of a surge in short-term demand from the construction sector. While the exchanges are able to act by tightening trading rules to hinder speculative activity, in the physical market there is no such check and, undoubtedly, an element of position taking has contributed to what may turn out to be a short-term squeeze driving up prices.

MetalMiner’s monitoring of domestic prices in China has shown a dramatic rise from the start of January:

These numbers correlate relatively well with the more general TSI HRC price for Asia, wherein TSI reports a 47% increase in prices from January to date.

The more granular and specific MetalMiner IndX numbers, though, illustrate the role construction is playing in this steel market activity. CRC, which has construction applications but is also used extensively in general manufacturing such as household goods and automotive, has risen significantly but rebar, which is used solely in construction for both infrastructure and housing, has risen by almost twice as much in percentage terms.

How much of this rise is due to solid end-user demand and how much is a combination of speculative position taking and profit taking by the mills? That’s hard to say. This graph from the Financial Times illustrates how much speculative activity has been behind the rise. 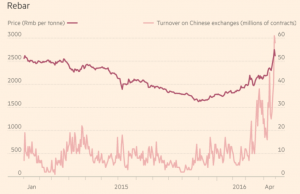 Many are expecting the increases to fizzle out this quarter and prices to ease back in the second half of the year. The speculative activity at least is said to be short term in nature, driven by investors looking for returns where equities and bonds have disappointed over the last six months. China really cannot afford another debt-fueled boom such as 2009-11, nor do they want to encourage idled steel mills to rush back into production. So, a short-term shot in the arm is the more likely objective for the current stimulus.

PREVIOUS POST:
U.S. Steel Accuses China of Stealing Trade Secrets, Does it Have a Case?
NEXT POST:
Oracle Acquires Textura, Takes on Construction Payments and the Financial Supply Chain