Beyond Anti-Dumping Week-in-Review: Section 201 and 337 Invoked!

Anti-dumping stories are our bread and butter here at MetalMiner. Nary a week goes by when we don’t cover either anti-dumping or countervailing duties cases brought by domestic metals producers against cheap imports that are getting a helping hand from foreign governments or purposely devalued foreign currencies.

Yet, this week, a major union representing aluminum workers and a major steelmaker took things a bit further. The aluminum industry was first up, when the United Steelworkers union recently filed a petition with the U.S. International Trade Commission for the U.S. to invoke a global safeguard under Section 201 of U.S. trade law and impose tariffs of up to 50% on primary unwrought aluminum. 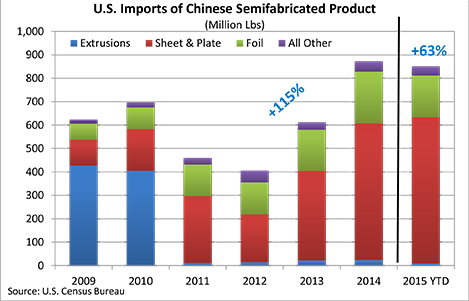 Section 201 is nothing to mess around with. Section 201 requires that the injury or threatened injury to a domestic industry be “serious” and that the increased imports must be a “substantial cause” of that serious injury. Serious business, people.

There’s a high bar to proving safeguards are necessary because the 50% tariffs are so high, yet the aluminum industry has had it up to here, particularly with Chinese dumping. Imports of aluminum “semi-finished products,” which can be as little as ingots with minor finishing, from China into the U.S. increased 63% in 2015, according to the Aluminum Association.

The USW has to look at the situation and say “if that’s not material damage, what is?”

We’ve heard all sorts of reports of semis used as primary ingot upon arrival here in the U.S. The international semi trade is causing imports to increase in Asia, too. The Aluminum Extruders Council has filed a separate case with the Commerce Dept. about how the semi “rebate” is being applied as a way to circumvent Chinese export taxes.

According to filings with the International Trade Commission, U.S. Steel claims a forensic analysis into an alleged 2011 illegal hack of its systems by culprits based in China included stealing plans for the chemistry for an automotive specialty steel alloy and its coating, the necessary temperature for heating and cooling the metal and the proper layout of its production lines.

What’s interesting about this one is that U.S. Steel is essentially eschewing the dumping margins, material injury, serious injury and the other calculations that go into anti-dumping and countervailing duties cases, and alleging outright theft via hacking. To do that you skip right past Section 201 to Section 337 and now you’re talking intellectual property.

Apparently, soon after the hack — which U.S. Steel was able to discover and forensically investigate — Chinese steel major Baosteel started selling Dual-Phase 980, the exact light-but strong automotive alloy that was hacked and stolen from U.S. Steel.

It’s not like this was the first time China hacked U.S. Steel, either. A grand jury indicted officers in the Chinese military for doing the exact same thing in 2014.

It’s great to see unions and domestic producers get tough and file these cases that seem to have strong evidence behind them. With how much the domestic industry has been losing to imports and outright product theft, what, exactly, do they have to lose?