Home | Exchange Traded Funds | Gold is Back in Fashion, How Far Can This Bull Run?
Commentary

Gold is Back in Fashion, How Far Can This Bull Run?

Gold prices jumped this week, extending their best start to a year in more than 30 years, the Financial Times reports.

Encouraged by a sharp fall in the dollar and a doveish stance by the Federal Reserve, the metal climbed 1% to $1,262.77 an ounce as the dollar fell over 2% against the yen after the Bank of Japan decided not to further ease monetary policy. 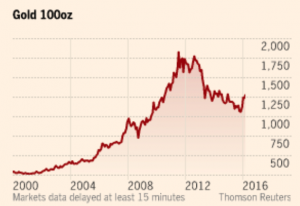 Gold had continued a long decline last year from it’s peak in Q3, 2011, but along with all other metals it has rallied some 19% so far this year as investors have plowed back into gold-backed exchange traded funds, encouraged by a relaxation in the Fed’s stance on interest rates and, from that, the prospects for inflation in the medium term.

Interestingly, this comes despite a lack of physical demand, particularly from the largest consuming nations of India and China this year. For this reason, not everyone thinks the trend will continue.

“The lack of physical follow-through is a fundamental reason for why we think sustained gold bulls will be disappointed by year end,” analysts at RBC Capital Markets are quoted by the FT as saying. “Absent a large and unforeseen risk-off move driving gold higher, we think that prices likely have already peaked this year.”

The paper reports physical gold demand had fallen by 24% to 781 metric tons in the first three months of 2016 as Chinese and Indian consumers bought less jewelry and central bank buying was, on the whole, lackluster.

The Fed had implied at the end of last year they would be raising rates four times in 2016, that changed early this year and the prediction is now just two riases, one possibly in June and another in Q3.

We would be surprised if those both happen and one rise seems more likely later in the year. If the mid-year rise fails to materialize that could further weaken the dollar and boost gold. We are no gold bulls but based purely on Fed actions there is something there to support the price for now. In the medium term, though, we would agree with RBC Capital, it will take significantly stronger physical demand to move the market markedly from here.