Home | Commodities | EIU: US Economy Heading for a Recession… Just Not Yet
Commentary

EIU: US Economy Heading for a Recession… Just Not Yet

To talk about the next recession feels bizarre.

For many people, we are barely out of the last recession and yet the numbers say that if the economy continues to grow as expected at over 2% this year and the next, by 2018 we will have “enjoyed” the longest period of expansion in the last century.

The problem is, expansion has been weak. Between 1992 and 2000 the U.S. economy grew at 3.8%. Between 2010 and 2018 it is predicted by the Economist Intelligence Unit (EIU) to grow by only 2.4%. Part of the reason appears to be a collapse in productivity growth, of which we aim to pen another article shortly.

For now, though, the EIU reports that although the U.S. in particular has continued to create excellent job creation numbers and is maintaining low but positive inflation, much of the developed world has failed to stimulate domestic demand. As growth has slowed in the emerging markets even export dependent economies like Germany have found growth prospects limited by slowing overseas demand. 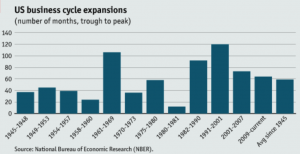 Expansions, by comparison, last for an average of just under five years. Helped by plenty of slack in the economy, low interest rates and low inflation, the EIU expects the current expansion to last for another 3-4 years.

But, and here is the point, the EIU expects the U.S. to overheat by 2018 by which time unemployment will be 5%, inflation will be 2.5% and the Federal Reserve will have tightened considerably as inflation begins to finally rear its head. Not that an external shock could not precipitate a recession beforehand — Europe has considerable potential to do just that and so does a hard landing in China — but on the balance of probabilities the EIU expects the next recession will be short, relatively benign, and home grown. 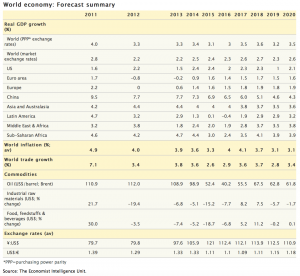 In the meantime, we can expect continued and considerable volatility. As we have seen in just the first four months of this year, the markets have lurched from doom to euphoria, prompted by fears of a Chinese slowdown and then excitement at China’s stimulus. China cannot continue to stimulate itself out of slow growth. Every cycle adds debt and unproductive investment but, in the short term, the rush of demand raises metal and commodity prices.

Interestingly, the EIU does not expect crude oil prices to bounce back to pre‑2014 levels in the next five years, as modest demand growth will fail to catch up with resilient supply. Despite a dip in U.S. production in 2016, global crude supply will expand further, the report states, on the back of continued output growth from OPEC and, to a lesser extent, Russia.

Combined with moderating demand growth, this points towards only a gradual increase in prices. The firm believes industrial metals prices will recover slowly in the remainder of the decade as capacity restrictions are too limited to tighten the supply market in the face of slow demand growth.

Let’s hope the respected EIU are right in their predictions. For industrial metals buyers, processors and consumers a three-to-four year period of stable positive growth without the price spikes of 2010-12 would be welcome.