Home | Macroeconomics | Why Aren’t We Getting Any Wealthier?
Commentary

Why Aren’t We Getting Any Wealthier?

The New York Times isn’t renowned for writing depressing pieces and, to be fair, a recent analysis the paper carried out on productivity growth was intended to be, and indeed was, a well-balanced analysis.

Unfortunately, although the newspaper presented three possible conclusions across a range of possible outcomes, the overriding conclusion remains uncomfortably depressing.

There have been a number of references in the business press over recent years about poor productivity growth, often in relation to the failure of mature markets to lift themselves out of the last recession and bounce back with stronger growth. But, in truth, falling productivity has been a feature of the U.S. economy for the last ten years. Nor does it appear to be related to recessions as this graph from the NY Times shows. 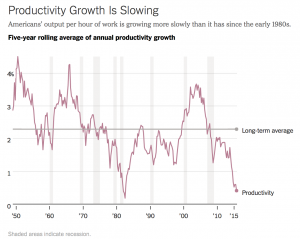 Slow Growth or No Growth?

True the economy went through a similar decline from the mid ’60s to the early ’80s, and bounced back, but it only managed above-trend growth for a few years and the paper contends this was a result of prolonged and substantial investment in staff, equipment and information technology on the back of a rapidly expanding stock-market during the ’90s.

During the 90’s and early part of this century, lower-grade jobs were being exported via offshoring while U.S. workers were, on the whole, being retrained and absorbed in an expanding domestic economy. That is not to make light of the impact on some communities that are more solely dependent on specific industries, the recovery for them has been long and hard.

But since the 2008 recession there has been no such impetus for growth. Mature economies have failed to invest and emerging markets have slowed in recent years. Although the U.S. has added jobs at an impressive rate, unemployment is down to 6% and could be at 5% by 2017-18 according to the Economist Intelligence Unit, Many of those jobs are part time in nature and it could be firms are investing in short-term casual labor rather than plant and equipment that would generate long-term productivity gains. It is a notable fact that companies are awash with funds, profit levels have been high but firms are failing to invest as if uncertainty about the future has engendered widespread caution.

From 2011 through 2015, the government’s official labor productivity measure shows only 0.4% annual growth in output per hour of work, the NYT reports. That’s the lowest for a five-year span since the 1977-to-1982 period, and far below the 2.3% average since the 1950s. A failure to raise productivity means our grandchildren will not be better off and have no higher standard of living than we do today. What happened to the American dream?

Arguably, in a very low-inflation environment low productivity growth isn’t as much of an issue as it would be if inflation was higher. Indeed, the deflationary effect of low-cost consumer goods imported from places like China probably allows people to feel like they are making progress even though wages remain very subdued. But deflationary price pressure only lasts so long and the distortions that gave rise to that situation are causing concern in the developing debt position in China, now faced with massive and unproductive over-investment.

It’s possible developments in automation and robotics could be the ’90s IT revolution of tomorrow, but, like IT, it will also create massive relocation and or dislocation of labor, 20 years ago we had a world with rapidly rising global GDP able to absorb that process and reallocate demand, today is a different matter.