CNBC recently reported that home construction weakened in March even as sentiment among builders remained high, but what’s more interesting is a quote from a Goldman Sachs report further down.

“Our analysis of payroll growth and wage inflation data suggests that labor shortages may not be to blame for the mediocre level of housing activity,” analysts wrote in a Goldman report. “We find that, on the one hand, the construction sector has experienced the largest job growth over the past year.” 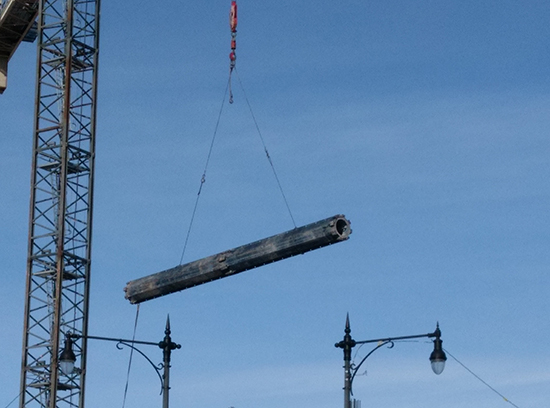 U.S. Construction workers are using 3D imaging, laser scanning and drones to place structural members like this one. Can the skilled labor shortage possibly be over? Source: Jeff Yoders/MetalMiner.

Construction growth has led all other sectors at 5%, according to the Bureau of Labor Statistics, but average hourly earnings in construction gained only 2.2% over the past year, which is about the national average.

Still, Goldman’s pronouncement that there’s simply no construction labor shortage anymore very much runs the opposite of what the industry has claimed for years. The numbers only tell half of the story because a lack of skilled labor is what plagues most construction sites.

Nearly 70% of home builders surveyed by the National Association of Homebuilders last June reported a shortage of carpenters, for example, up from 63% in 2014. And in a July survey by the Associated General Contractors of America, 86% of commercial builders said they’re having trouble filling hourly or salaried positions, up from 83% last year.

This may not look like it affects the bottom line to Goldman-Sachs, but it certainly does when only carpenters, iron workers or electricians can move your project along.

Many high schools have phased out shop classes and parents increasingly have steered graduates to four-year colleges and white-collar careers. The Home Builders Institute, which does training, and local home builders groups, recently rolled out more instruction programs but it takes at least 12 to 18 months for a new recruit to become a productive worker. That’s why pay increases had reached as high as 2.6% last year before falling back down to around the national average that Goldman cited. It’s likely a small rest in the rate of increase rather than a full stop, as unfilled job openings in the construction industry have risen steadily since 2009.

So, while I respect Goldman Sachs and its analysts’ learned opinions, I’m not ready to bless this report’s findings and call the skilled construction labor shortage over. Mike Rowe may have to fill all of the dirty jobs that are still out there before that happens.