Our Editor, Jeff Yoders recently reported on the launch of the CME Group’s new alloy 380 aluminum alloy contract, a product many in the domestic market have been eagerly awaiting and consider long overdue.

Historically, consumers would have hedged their alloy ingot requirements against the London Metal Exchange contract but as the LME’s aluminum benchmark became increasingly disconnected the casting industry all but boycotted the LME’s Primary HG contract, making the case for the CME to step in even more compelling.

From a high point in 2011 the LME aluminum alloy contract has plunged in popularity with volume down year after year. 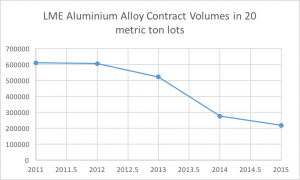 Although nearly all traded volumes are down in recent years on the LME, aluminum alloy has fallen further than most. The exact reasons for the LME’s wider decline in volumes is a subject of some debate.

Reuters recently reviewed several reasons, one of them is the rise of activity on the Shanghai Futures Exchange. This year the SHFE has seen an explosion in traded volumes although not of the kind the LME would have welcomed. The SHFE volumes have been driven by highly speculative trades. Worse still, much of it is retail in nature.

This has the effect of distorting real price discovery and would undermine the foundation of the LME which was set up and has operated for a century or more on the basis of price discovery for producers, processors and consumers, not what many unfamiliar with the market have on occasion alleged, to speculate.

Increasing volumes on the CME pose more of a threat to the LME in terms of providing reliable price discovery and hedging for the trade, particularly in the North American market. Where the SHFE is so dominated by the speculative element, the CME’s cornerstone is more from trade participation… much like the LME.

Who Will Use the New Alloy Contract?

The CME’s aluminum alloy contract is not likely to garner support or participation from outside the North American market, but for consumers in the U.S. it should provide a welcome hedging and price discovery tool. Even if LME aluminum alloy volumes stabilize at current lower levels the CME, with a contract focused as it is on a specific part of the U.S. manufacturing base, has a solid role to play in the years ahead.

PREVIOUS POST:
May Lead Price Forecast: Demand Forecast for 2016
NEXT POST:
Oil Prices Near $50: Why Investment Banks Were Wrong on Oil