Home | Commodities | European Union Brexit: Will the UK Stay or Will She Go?
Commentary

European Union Brexit: Will the UK Stay or Will She Go?

In exactly 30 days the people of Britain will vote on whether to leave the European Union.

For the people of the U.K., and indeed the rest of Europe their decision could be a turning point in the future of their country and the wider European community. It is no exaggeration to say Britain’s exit could spark the break-up of the E.U.

The near-miss Austria experienced yesterday in voting in a far right president illustrates how extreme tensions within the European Union have become. Only by all the opposing parties supporting pro-E.U. Green party socialist Alexander Van der Bellen were they able to beat the far-right Freedom party candidate Norbert Hofer from becoming head of state, the margin was a miniscule 31,000 votes out of an electoral return of 4.64 million.

Dissatisfaction with the E.U., supported by fears of immigration destroying the social fabric and cultural heritage of societies across the continent, has played a major part in not just the U.K.’s referendum but in the rise of both far-right and far-left parties across Europe in recent years.

Anecdotal evidence can be very misleading, dependent as it is on the social mix such opinion is garnered from and the geographic location. Until recently, the decision in the U.K. seemed on something of a knife edge, particularly in the weeks following the announcement by Boris Johnson, London’s charismatic former mayor, that he was actively campaigning for the Leave vote, but in recent days the markets at least have been pricing in a Stay outcome, as evidenced by the strength of sterling.

Indeed, a poll this week showing a late swing by older voters to maintain the status quo resulted in a sharp jump in the value of the pound as this FT graph shows. 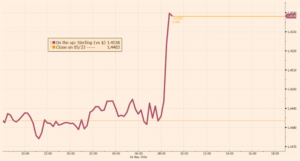 Alluring as the Leave campaign’s image of a free and unrestricted future for the UK would be, most are coming to realize such an outcome is unlikely to be achievable. The least-damaging outcome in the months after leaving would be for a quick trade deal with the rest of the E.U.

Prolonged negotiations would create uncertainty and most economists estimate that would result in a sharp deterioration in inward investment. A quick trade deal, though, would require the U.K. to accept free movement of labor and a contribution to the E.U. budget, the very things the Leave campaign are arguing should stop.

Other countries in Europe such as Norway and Switzerland have to accept those terms in spite of not being part of the E.U., and realistically Europe could not afford to grant the U.K. exceptions without fueling that growing unrest for similar compromises from elements in Austria, France, Italy and several Eastern European states.

The Economist has been running a daily poll tracker that up to a few days ago was showing positions neck and neck but just recently has shown a divergence as older voters have begun to sway more towards maintaining the status quo, A few days ago it was 41 to 40, today it is 47 to 40, with the waverers getting off the fence,

The cautiously rising confidence of the Stay camp carries with it greater short-term market risk, of course. As the market prices in the probability of a stay — the strength of sterling, the steady FT100 stock-market performance and the relatively benign impact on bond yields — a decision to go would have that much more impact.

Erik Nielsen, chief economist at UniCredit, an Italian bank, is quoted by the Economist as saying he thinks the pound could fall 10-15% in trade-weighted terms. The news would probably drag down the euro against the dollar, too, since the long-term stability of the EU would be in doubt.

Federal Reserve governors have said that the British poll might affect their policy decisions, because of the potential impact on confidence. So, Britain’s decision, like the song goes, should I stay or should I go? will have repercussions not just for the U.K., but for Europe, and the effects if it goes the wrong way could ripple out across the world.

PREVIOUS POST:
Steel Imports Into the US Down in April; Chinese Nickel Imports Up
NEXT POST:
CME Group Looks to Challenge the Venerable London Metal Exchange