On Wednesday, the People’s Bank of China weakened the yuan/renminbi to its lowest level in five years. The actual cut was small: only about 0.34%. The Chinese yuan closed 0.2% weaker on Tuesday at 6.559 per dollar compared with that morning’s midpoint of 6.5468. Since the end of April, the currency’s value has dropped three weeks in a row.

It did not send world markets spiraling downward as panicked investors did last August when China devalued its currency by nearly 2%, or in early January, when it cut by about 0.5%.

How Fast is the Chinese Economy Growing?

China’s ruling Communist Party still claims the country is growing 6.5% to 7% a year. Capital Economics, among other independent forecasters, believes the real number is closer to 4.2%. 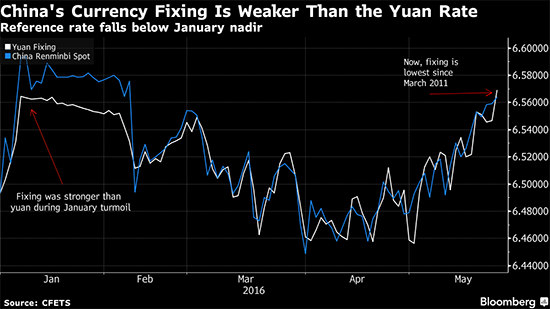 Market watchers believe there is a struggle going on between China’s top leaders on what to do next.

The Wall Street Journal reported that, behind closed doors in March, some of China’s most prominent economists and bankers bluntly asked the PBOC to stop fighting the financial markets and let the value of the nation’s currency fall. They supposedly got nowhere with bank officials.

The yuan/renminbi’s daily exchange rate is now back under tight government control, according to meeting minutes that detail private deliberations and interviews with Chinese officials and advisers who spoke with the WSJ about the country’s currency policy.

President Xi Jiinping has reportedly had second thoughts about the long-held official party goal of making the yuan/renminbi more market-based. He is not alone among those in power who are concerned about Chinese wealth flowing out of the country and into foreign markets.

The money flowing out of China by companies and individuals slowed to $28 billion in April from more than $100 billion in December and January, according to estimates from UBS Group AG.

Among this worried group, centrally controlling the currency is seen as a way of keeping investments at home and simultaneously promoting stability. President Xi is also reported to have been dismayed that his earlier decisions on structural overhauls to the Chinese economy haven’t been effectively implemented by the government led by Premier Li Keqiang.

Supporters of Li counter that his job also requires him to hit Xi’s annual economic growth targets for the nation of 1 billion. That, understandably, tends to mean stopping steel mill closures and other measures that were originally outlined to make China’s economy more market-based.

What Does This Mean for Metal Buyers?

So, does the Chinese economy need more stimulus spending or not?

It’s a big question at a time when the world is also wondering what the Federal Reserve will do. If this was, indeed, an attempt to beat a Fed interest rate hike in June or July that will make the U.S. dollar stronger against the yuan/renminbi, then what if the Fed continues its dovish policy and doesn’t move rates at all? Expectations for a June rate hike are still 50-50 at best.

For now, it seems that Chinese officials believe the benefits of freeing the yuan/renminbi from Central Bank control are outnumbered by a number of threats to the domestic economy. Reemphasizing the currency’s stability also brings a sigh of relief to trading partners who worry that a weaker currency would boost Chinese exports at the expense of those produced elsewhere… including metals.

PREVIOUS POST:
OEM Distributor Finance: How Can it Help Manufacturers?
NEXT POST:
ITC Officially Launches Theft Probe Into Chinese Hacking of US Steel