Home | Global Trade | Chinese Aluminum is Back on the Rise
Commentary

Chinese Aluminum is Back on the Rise

An interesting article in Reuters this week examines the Chinese aluminum market and asks, well, what the hell is going on?

It points out that the statistics coming out of China are even more unreliable than normal showing rises and falls of millions of metric tons from month to month. Specifically, Chinese output supposedly slumped by an annualized 6.6 million mt in the December-February period only to surge back by 5.2 mmt in March and April, almost certainly not the case when you consider the time it takes to idle and restart smelters.

Taken over a longer time frame, though, run rates actually appear to have fallen slightly from Q4 to Q1 which would make sense when you look at the low Shanghai Futures Exchange (ShFE) price during that period. It fell below 10,000 yuan per metric ton ($1,525). But the worry is the 16% rise in the ShFE Aluminum ingot price will almost certainly encourage capacity to come back onstream, how much remains to be seen, but a rise like this, well in excess of the more modest 6% London Metal Exchange rise, will encourage re-starts. 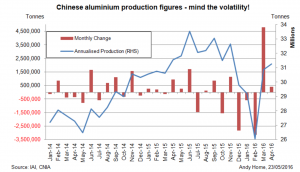 According to Reuters. the most active aluminum contract on the ShFE is currently trading around 12,400 yuan per mt ($1,891), back in profitable territory for many of China’s smelters.

Demand has picked up in China, the article states, but as always how robust and for how long that uptick is likely to last is extremely difficult to tell.

Q1’s stimulus sugar rush has already started to fade and although many projects like power grid expansion initiated as a result of that will last through this year and into next, it will fall to consumer goods, automobiles and so on to maintain the momentum.

Exports are down supporting the argument that domestic demand is up and the ShFE premium over the LME is denting mills’ appetite to export. Let’s hope that trend continues, China has the potential to undo the benefits western mills may garner from painful closures aimed at balancing the market.