This week, the Car Wars got hot again as General Motors, on behalf of its Chevy Silverado truck line, started running ads about how weak the rival Ford F-150’s aluminum bed really is.

GM literally poked holes into the idea that aluminum could be a strong as steel.  They even had Howie Long rub it in. 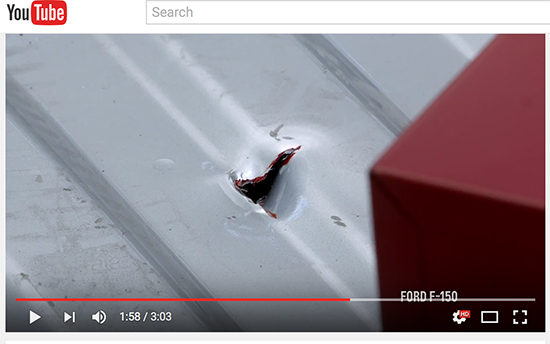 The advantage Ford holds, and the reason the automaker pursued aluminum for truck beds in the first place, is that their F-150 is still much lighter and conforms more easily to federal corporate average fuel economy (CAFE) standards. Perhaps Ford should break out the scales and do a fuel economy comparison to strike back at GM? Or should it just keep repeating “military grade aluminum?”

While the automakers were duking it out about who’s truck is tougher, actual steelmakers turned their attention to Beijing where the U.S.-China Strategic and Economic Dialogue took place. U.S. Treasury Secretary Jack Lew called on China to, again, cut excess steel production capacity. China said they would. Again.

The steelmakers gave that a hearty “put or show up.” Well, the American Iron and Steel Institute used more words but that was, essentially, the gist. Our own Stuart Burns also noted that steel is just one of many things that China overproduces and there really might not be much that Beijing can actually do to rein in the wealth of tiny producers of steel and refiners of diesel fuel in its far-flung provinces.

So, trade wars, car wars and tariffs. Just another week in steel.