Drilling in the North Sea started in the ’60s but really took off after the 1971 oil crisis as higher oil prices supported massive investment in deep offshore drilling technologies and infrastructure required to exploit what was, at the time, one of the most challenging environments in the world for extracting oil and natural gas.

The city of Aberdeen flourished as the beachhead for this campaign and for 50 yeas it has grown and matured as a world class center of excellence in support services and facilities developing technologies and competencies that have been applied in deep-water offshore environments like the Gulf of Mexico, the South Atlantic and in the Arctic ever since.

But the collapse of the oil price, high taxation and dwindling reserves have hastened the end of a region whose days were always numbered by the finite nature of the resource. 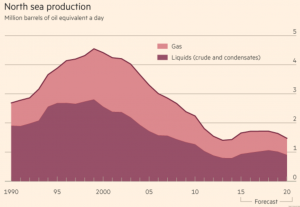 Yet as oil majors ponder the timing of closing and decommissioning offshore oil rigs, the challenges are yet again driving innovation and technologies that will be of benefit in decades to come around the world for those companies active in the work.

Where the North Sea led in developing deep-water exploration and development, it is now leading in developing decommissioning in one of the most highly regulated and demanding legal and environmental frameworks likely to be experienced anywhere. No corners can be or will be allowed to be cut in the British, Norwegian or Dutch areas of the North Sea. 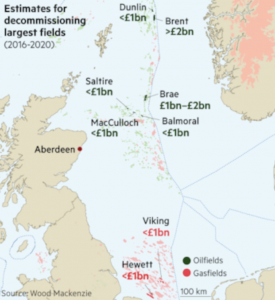 The Financial Times covers the topic in some depth and offers hope that as renewable technologies become more viable, in areas such as Africa and Asia, decommissioning will accelerate even in areas where oil is still able to be commercially extracted.

At present, decommissioning in the North Sea is only just beginning. Companies are faced with a difficult decision in the current low oil price environment: Should they continue to produce oil and gas at a loss, hoping to make the money back if and when the price rebounds, or should they pack up altogether, incurring millions of pounds of decommissioning costs in the process?

It is prohibitively expensive to come back and start drilling once a well has been left, so any decision to leave is final. The closure process is long and expensive. First, the firm must first make the reservoir safe, a process that involves removing tons of steel from the well and sealing it up to make sure no oil or gas escapes.

Companies calculate it will cost an average of $14.1 million (£10 million) to plug and abandon a complex North Sea well. Removing the physical structures above, of course, will be far more expensive. On Brent Delta, one of Royal Dutch Shell’s oil platforms 115 miles northeast of the Shetland Islands, which is currently undergoing dismantling, it will cost several billion pounds and take hundreds of workers years to complete. 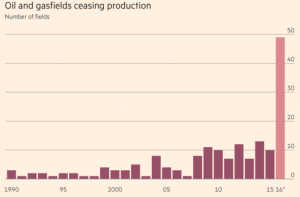 Industry body Oil and Gas U.K. suggests it will cost nearly $24.1 billion (£17 billion) over the next 10 years to remove around 80 platforms and their associated infrastructure. The estimated cost to complete the entire job through to the 2050s ranges between $42.5 billion (£30 billion) and $85.1 billion (£60 billion), a figure that has risen on several occasions as the scale of the task has become clear, the FT says.

Between now and the mid-2050s, around 470 platforms, 5,000 wells, 10,000 kilometers of pipelines and 40,000 concrete blocks will have to be removed from the North Sea. Brent Delta’s top platform alone weighs 24,000 metric tons and will be lifted in a single section and carried on a massive catamaran to the mainland for dismantling.

Shell has applied for permission to leave behind three massive concrete subsea structures, each the size of the Empire State Building in a similar rigs-to-reefs practice that is employed in the Gulf of Mexico but is currently banned in the North Atlantic, of which the North Sea is a part.

Even if such changes are permitted, the removal of subsurface and above surface architecture is a massive undertaking and one that could well spur an industry on a whole new scale from what we have seen in the past.

PREVIOUS POST:
Southeast Asia: More Than Just a Supplier of iPhones
NEXT POST:
Zinc Continues To Outshine The Metals Pack