Britain’s Not the Grumpy Man of Europe, France is Actually Angriest

It may be Britain that is holding a referendum and sounds like the awkward squad of Europe, but actually a recent poll of opinions by the Pew Research Center reported in the Financial Times shows Britain is not the most disenchanted member.

That award, not surprisingly, goes to Greece, and who can blame the Greeks? 71% of respondents had a negative view of the European Union. As this charts shows, the standout sullen member with the biggest slide in support though is, of all countries, France. Long the core of the EU ideal, along with Germany, it would appear the recent migration crisis has driven a huge swing in opinion aided, no doubt, by persistently high double-digit unemployment and stagnant growth. 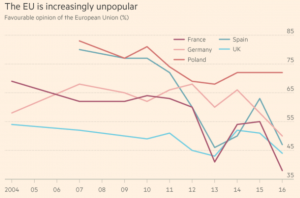 Views range, the FT reports, on how the EU has handled the migration situation ranging from poor (Netherlands and Germany) to catastrophic (Sweden and Greece). If the migration crisis was set against a backdrop of robust growth in living standards, it may not be creating as much negative sentiment although politicians on the far right such as Marine Le Pen would still use it to fan the flames of nationalism and support for right wing parties.

But Europe’s growth has been low since the financial crisis and, by many measures, is collectively still not back to 2007 levels. Worse growth has been lopsided with Germany in particular doing rather well out of a relatively weak Euro running a massive trade deficit while other parts of Europe, particularly France and the southern states, have not.

Collectively, the net approval rating is poor with only two countries showing a positive rating, not surprisingly maybe the two that are probably doing the best out of it, Poland with significant net aid opportunities for its workers to secure unemployment overseas and high-net inward investment. 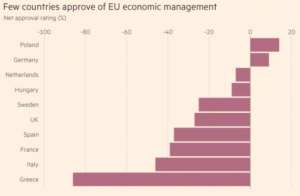 One trend that is consistent across Europe is intergenerational differences. Older voters are less positive than younger ones across all countries, again with France’s sentiment at the bottom. 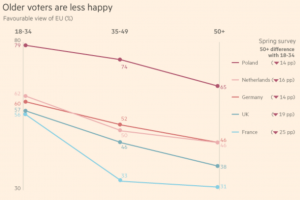 Is this wisdom or pragmatism, you may ask? Young votes tend to be more ideological and may be less likely to own a house or be settled into careers with limited growth prospects.

All things are possible for 20-somethings, as workers age they look to the political and social structures around them and question the efficacy of the system. The French clearly feel their prospects leave a lot to be desired.