While London Metal Exchange warehouse queues have all but disappeared, with the exception of Vlissingen in the Netherlands for aluminum and New Orleans for zinc, the even better news is physical delivery premiums have dropped back closer to historically lower levels and more importantly taken on a flat, stable pattern.

As Reuters’ Andy Home points out in a recent article, the reasons for the horrendous spike in physical delivery premiums last year were always contentious and, in reality, multiple in origin but arguably long load-out queues played a part, although we always maintained they were as much symptom as cause of a deeper malaise in the physical aluminum market.

Still, the return to a steady $170-180 per ton level for the Midwest premium and a stable range of $90-120 per metric ton range for Japanese Port premiums is a welcome relief for consumers after the sky high levels of 2014-15 when Japanese rates hit $425 and the MW premium was well over $500.

According to Reuters, Detroit has no queues now, although there is in excess of 150,000 tons of canceled metal ready to be moved out but the owners are not collecting it. Home speculates this is because they have negotiated a better shed rent with Metro International — now that the material is no longer in the LME system — and as such are happy to leave it where it is.

Canceled metal is rarely removed from the warehouse to actually be consumed. It is nearly always simply moved from one location to another for lower storage rates, or even not physically moved anywhere but just taken off the LME system and into a shadow off exchange finance arrangement where rates are agreed at lower levels.

Only Vlissingen still shows queues, bizarrely after dropping to “just” 116 days in February it has since ballooned out again to 336 days following the cancellation from warrant of 656,000 mt in late March and April. Reuters reports Vlissingen now holds 944,725 mt of aluminum, of which 756,325 mt, or 80% of the total, is in the form of cancelled warrants awaiting load-out. The good news, though, is Pacorini’s Vlissingen queue is not impacting European physical delivery premiums, which have continued to ease this month as this chart by Reuters shows. 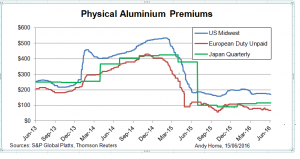 Queue or not, we should not complain. The LME’s rule changes have had the desired effect. Queues have dwindled and, more importantly, so have physical delivery premiums. We may now have a mechanism to hedge premiums via the CME Group’s Midwest U.S. contract but the stability in the premiums may make that less of an imperative over time. For now, though, the market has taken up the CME’s new product with some enthusiasm with over 740,000 mt traded so far this year. It would seem consumers and traders are not ready to trust to a stable premium just yet.

PREVIOUS POST:
Lisa Reisman to Speak at the SMU Steel Summit 2016 in Atlanta
NEXT POST:
June MMI Suffers a Great Correction… Or Did it?