They say there is nothing like competition to spur innovation and improve efficiency but the same could be said of adversity. Volkswagen is a case in point.

After the biggest corporate scandal of the decade, VW finds itself in an invidious position. Last year it posted a $1.82 billion (€1.6 billion) net loss, its worst ever result in 78 years, as it recorded $18.3 billion (€16.2 billion) of charges to cover the cost of fixing diesel cars caught up in the emissions reporting affair.

Sales held up remarkably well when you consider the betrayal of trust the firm’s actions invited, but the share price remains 28% below its pre-scandal level after recovering from an initial 40% fall. Nevertheless, VW’s share of its home European market have fallen to a 10-year low and although sales rose slightly in May they rose more slowly than the 10 other top-selling marques across Europe according to an Financial Times article. From 12.9% market share in 2013, VW has fallen to 11.1% in May and spurred the board into action. 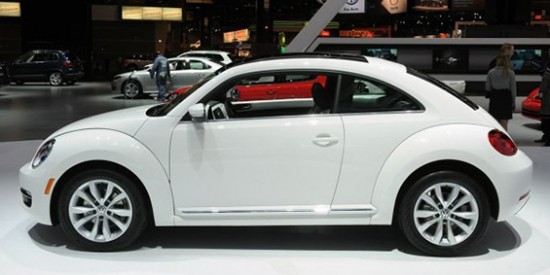 Can VW turn its fortunes around? Perhaps with Electric Beetles? Source: VW

VW has announced a number of targets. First, an ambitious move into electric vehicles, saying the company will introduce 30 electric models by 2025 with annual sales of between 2 and 3 million units. To achieve this, VW is opening up the doors for collaboration with external parties, planning to spend $11.2 billion (€10 billion) on new technologies, acquisitions and venture capital investments.

Good luck in raising the group’s productivity with that, though. Few early adopters of EVs have made any significant money out of the technology. The volumes just haven’t been there, but maybe VW feels the technology is maturing enough for it to come of age. Certainly VW recognizes range is a major issue and its executives have announced they intend for battery technology to become a core competency of the group.

An additional focus is being made on controlling costs, probably in recognition that VW’s drive to squeeze costs out of its suppliers in the last decade has probably taken up all the low-hanging fruit, the intention now is to develop and refine VW’s modular design architecture.

All major automakers have adopted this practice to a greater or lesser extent designing standardized core components that can be “bolted” together across ranges, thereby increasing module volumes and reducing costs. VW is being particularly aggressive in announcing it intends to reduce theirs from a current 12 modules, spread across their 12 marque group range, to just four modules.

Volvo, by comparison a fraction of the size of VW with a smaller range and only the one brand, will have two fully scalable and wholly modular vehicle architectures, when CMA is launched in 2017.

Such drastic reshaping of the organization, supply chain and production are probably needed for VW to significantly raise its return on capital and its operating margin from current levels. In the process, its executives, engineers and even line workers will have to innovate and recreate in ways that will have spin-offs that benefit other automakers in the market.

From adversity, so progress is made.