Okay, this may be a little off the wall for a hard-bitten industrial metal consumers trade journal, but it is such a cool use of aluminum that it just couldn’t be passed by.

The artist, Wolfgang Buttress, has created a 56-foot-tall aluminum beehive among a wildflower meadow on the grounds of London’s Kew Gardens as both a visual thing of beauty and an aural experience like no other.

“The Hive,” as it is known, was first created as Great Britain’s entry in last year’s World Expo in Milan, Italy, according to the AluminiumInsider from whom this photo is replicated. 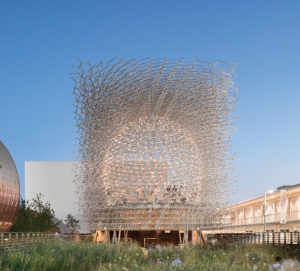 The Hive is a visual and aural art experience. Source: AluminumInsider.

Over three million visitors passed through it before it was taken down and returned, only to be recreated here in the U.K.

The structure is made up of 169,300 aluminum bars joined at spherical nodes to form abstract, honeycomb-like hexagons that spiral into the sky. Their rhythm follows the Fibonacci mathematical pattern found throughout nature from shells to trees, and in the proportions of classical architecture an article reports. Others, still, say the structure is  resembles a skep — yes I had to look that up, too — the open-ended straw baskets used for thousands of years by beekeepers.

Within the structure, there are small speakers which relay the noises live from inside Kew Gardens’ nearby hives and the sounds are overlaid by human voices and stringed orchestral instruments said to harmonize with the sounds of the bees. 1,000 LED lights embedded in the structure add to the experience in a pulsating light display and must make the experience even more impressive at night.

The aim of the installation is not purely artistic, though. Buttress and Kew Gardens intend it should create awareness of the plight of bees that have been dying inexplicably in the developed world, yet play such a crucial role in pollination of commercial crops that places like California have to import swarms from Australia and New Zealand to keep their agricultural industry productive.

Regardless, the Hive is a novel and intriguing application for a metal whose properties of lightweight, relatively low-cost, good corrosion resistance and ease of use make it almost uniquely suitable for the challenge of such a project.