A recent Reuters article draws an interesting comparison between the Chinese aluminum and steel industries and then goes on to draw some not-so-encouraging conclusions for aluminum. Excess aluminum production there is damaging the prospects of aluminum producers in the rest of the world, purely because of the size of China’s massive aluminum industry.

Both metals face excess production at home due to rampant overinvestment and slowing domestic demand. Reuters lists a number of similarities between the two industries: China is the world’s largest producer in both markets, accounting for 51.5% of global steel output and 54.4% of global primary aluminum output in April.

In both industries, China has been exporting excess production of steel and aluminum in the form of semi-manufactured products, with steel product exports last year totaling 112.4 million metric tons, representing around 14% of the rest of the world’s output and aluminum product exports of 4.2 mmt representing 17% of the rest of the world’s output. In both cases, exports have damaged prospects for producers elsewhere, forcing closures, losses and delaying investments. 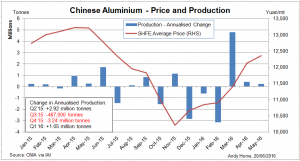 In the case of steel, though, the threat of a delay to China’s application for market economy status by the World Trade Organization has forced a more conciliatory response by Beijing in recent discussions, and the promise of large-scale closure of older capacity in China.

How effective this will be remains to be seen but, even so, it is in marked contrast to the position aluminum is in, where Beijing seems unable or unwilling to curtail new investment. As prices on the Shanghai Futures Exchange have risen this year, idled smelters have restarted and new capacity has continued to come on-stream.

The other factor apparently effecting Beijing’s attitude is the rapid rise in capacity is coming from new state of the art low cost aluminum smelters in China’s northwestern provinces. Aluminum is not seen as an old-fashioned, state-dominated industry operating polluting plants close to urban areas.

China’s new aluminum capacity is cutting-edge, world-class technology and — at current prices at least — is making money. As a result, Reuters concludes capacity is unlikely to be trimmed anytime soon, at least by government intervention. For aluminum producers outside of China, that is not good news, and although recent rises in price to $1,600/mt are better than the $1,450-1,500/mt levels of late last year, it doesn’t offer much upside in the short- to medium-term if China keeps flooding the market with excess semi-finished products.