In a surprise move, Andrew Harding, the head of iron ore at commodities miner Rio Tinto Group has been passed over as CEO to replace outgoing Sam Walsh on July 2 by relative newcomer to the group, Jean-Sebastien Jacques who only joined in 2011 and has headed up Rio’s copper and coal divisions, the Sydney Morning Herald reports.

Harding has been with Rio for 25 years and had been expected to replace departing Walsh in part due to his experience in iron ore which is central to Rio’s existence. The miner generates about half its revenues and around 90% of its earnings from iron ore sales, just 9% from aluminum and copper and the balance from diamonds and other minerals.

The move is seen as part of future plans for Rio to reduce reliance on iron ore and to divest itself of coal assets. Although the firm would argue otherwise — its cost of production for iron ore is a fraction of what it was five years ago — the firm’s expansion into an already oversupplied market is seen by many as a dead end.

Rio Tinto increased iron ore production by 11% last year to 327.6 million metric tons, and that should rise another 7% to 350 mmt by the end of this year, the Telegraph’s Questor column reports. The miner is not alone as rivals BHP Billiton and Fortescue also ramp up production to offset falling prices. 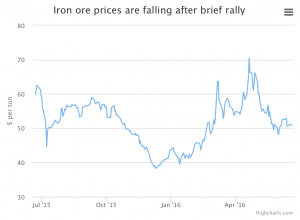 This year, the policy appears to have paid dividends as Chinese demand has risen on the back of a short-term boost from a huge government backed loan splurge at the start of the year, but there are signs the economy there is slowing again.

The SMH believesthe  Jacques appointment signals a recognition commodity prices are going to take a long time to recover and his approach will be needed to identify resources for future growth and for cutting unwanted assets to reposition the group across resources with better growth prospects and less reliance on iron ore.

In the meantime, Rio is well positioned for a prolonged period of low commodity prices. Under Walsh it has slashed its dividend, capital spending, workforce, and wages. At the same time, cash generation has remained strong from the core iron ore business while profits have fallen.

The company has focused on debt reduction, with net debt expected to fall to $12.5 billion by the end of this year, down from $18.1 billion at the end of 2013, and that is against $37.3 billion of shareholder’s equity.