Home | Exports | Brexit: So, What Kind of Deal Can an Independent UK Expect From the EU?
Commentary

Brexit: So, What Kind of Deal Can an Independent UK Expect From the EU?

So, as we discussed above, if the new, post-Brexit U.K. allows open access to workers from the European Union — and not allowing open borders and easy employment for other Europeans was the central plank and sticking point of the entire Leave campaign — it might be easier to make a deal with those former partner nations in the E.U. That would also raise the question, “what was all of this for?”

If discarding the objective of banning open access proves too much of a barrier, the U.K. may opt to fall back on World Trade Organization rules which will mean tariffs and possibly other bureaucratic barriers such as quotas will be established between the U.K. and Europe. That will encourage firms to locate future investment inside the single market rather than in the U.K.

In the meantime, and a final solution could be two years away, the U.K. benefits from a lower pound which will boost exports to the single market and rest of the world. There are a number of models the U.K. could agree with Europe on, long-term, to establish trade rules and coexist in the future. 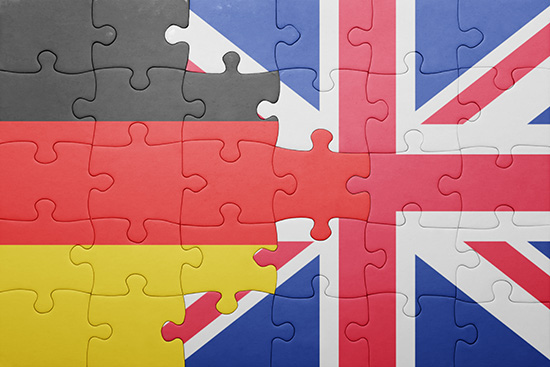 Germany exports the third-most of its goods to Great Britain behind only the U.S. and France. Negotiators are already trying to solve the puzzle of how to let the U.K. leave the E.U. without Germany leaving all of that business on the Brexit table. Source: Adobe Stock/Luzetania.

The Remain camp’s favorite is the Norwegian model that gives tariff-free access to the single market in return for free movement of labor, acceptance of many of the E.U.’s laws and payment into the E.U. budget, although no say whatsoever, into how that money is spent. The movement clause is likely a dealbreaker for Leave hardliners.

In between that and complete disengagement, though, are mid-way positions. Switzerland’s deal has open access but has to accept many of the E.U.’s controls and movement of labor and Canada has negotiated, but still has yet to implement, the E.U.-Canada trade agreement (CETA).

That agreement removes over 99% of tariffs between the two economies and creates sizeable new market access opportunities in services and investment. It still excludes banking, a key consideration for the strong U.K. banking sector.

A more intriguing question for those not so directly impacted by the decision to leave is what impact Britain’s exit will have on the rest of the E.U. The block stands to lose a key trading partner, particular the E.U.’s largest economy and banker, Germany. The U.K. is, by far, Germany’s most profitable export market.

With its 89.3 billion euros worth of exports to the U.K. last year, Britain is Germany’s third-largest export market, after the U.S. and France. It raises the question, will Germany give all of this up by shutting the U.K. out of a free-trade agreement with the E.U.? Maybe not.

Much is made of Germany’s booming trade with China, but the report goes on to explain that last year German exports to the U.K. were 25% higher than its sales to China with the big difference being that Germans made a huge surplus with the U.K., but their China trade recorded a $22 billion (20 billion euro) deficit — a fourfold increase from a deficit in 2014.

The other advantage Britain has to play is it remains one of only two credible military powers in Europe. The U.S. and U.K. are the cornerstone of Europe’s NATO defense, a position even most Europeans will accept. At a time when eastern European states are clamoring for more troops to be stationed on their soil to counter Russian jingoism, Britain’s continued engagement with Europe may have some attraction for Europe’s leaders, once they have calmed down and weighed up the options.

Europe, itself, is not exactly in a great place politically.  Part of the virulent reaction in Brussels to the U.K.’s decision comes from a recognition, conscious or unconscious, that many of Europe’s governments are fragile. These governments are holding together shaky coalitions with strong nationalist forces vying for influence.

We probably are not about to see the imminent collapse of the E.U. that some have predicted, or some may honestly hope for because of their self-interest, but Britain’s decision will not have helped stability and has probably put an end to further, deeper, integration.

PREVIOUS POST:
Construction Labor Costs Outpace the Commodities Price Slump
NEXT POST:
What Happens Now? What Will Britain’s Exit Mean for the EU?