Falling global demand for commodities has led to steep declines in their prices, but savings are being offset by higher demand and wages for a dwindling pool of skilled construction laborers in the U.S.

Worker shortages have continued to drive up labor costs for the construction industry, according to new research from real-estate brokerage firm CBRE, Inc.

The Wall Street Journal reports that prices for asphalt have dropped more than 42% and iron and steel products have fallen by nearly 15% over the past year, but average construction costs increased by 1.8%, the report found. That is because average hourly wages for construction workers have continued to climb as more projects come online throughout the recovery and the supply of skilled workers isn’t keeping pace. 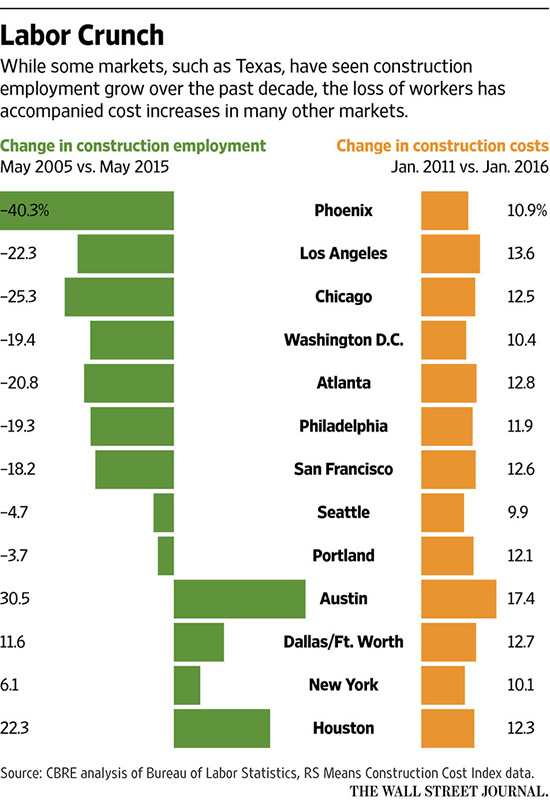 The article states that workers in the domestic construction industry are aging, a trend we have been documenting for some time. The share of people aged 19-24 entering the industry in 2012 and 2013 was 13%, down from 18% in 2006, according to U.S. Census Bureau data.

Changes in immigration patterns are contributing to the shortage, too. The U.S. had 570,000 fewer construction workers born in Mexico in 2014 than in 2007, according to research from Chris Porter at John Burns Real Estate Consulting, as immigration has sharply declined during that period.

The article also notes that risk-averse construction companies are increasing off-site prefabrication and other processes that eliminate on-site work. Industry giant Turner Construction, has been relying on 3D modeling and other process technologies to control risk and costs over the last 20 years as well.

Another report, this one from the Associated General Contractors of America reported that only 19 states saw month-over-month construction employment growth between April and May, a loss of 15,000 jobs.

AGC CEO Stephen Sandherr said in a press release that “it is only a matter of time” before the skilled worker shortage affects the general economy.

PREVIOUS POST:
Volkswagen Pays $15 Million Price for U.S. Emissions Cheating Settlement
NEXT POST:
Brexit: So, What Kind of Deal Can an Independent UK Expect From the EU?