The backdrop for presumptive republican presidential nominee Donald Trump might have said more than the bombastic businessman and reality show host yesterday. Trump gave a speech at the Monessen, Pa., plant of Alumisource, a company that provides shredded aluminum products and fines used in the production of deoxidation, desulphurization and artificial slag conditioners to the steel industry.

Talking about trade with piles of shredded scrap and fines surrounding him, Trump called the North American Free Trade Agreement a “disaster” and said he would renegotiate it to get a better deal “by a lot, not just a little,” for American workers. He also threatened to withdraw the U.S. from the deal if his proposals aren’t agreed to. 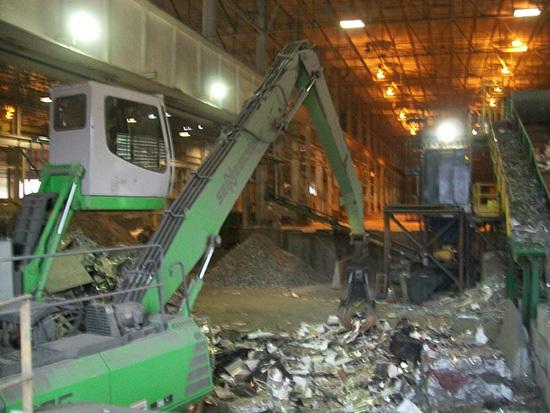 Trump’s rhetoric was welcomed by a mostly receptive audience in the Rust Belt city of 7,500. As a native Western Pennsylvanian, it’s understandable, to me, that both Monessen and Alumisource could accurately portray the image of a “manufacturing city” that the campaign is trying to convey and whose voters it’s trying to reach.

“We already have a trade war,” Trump said. “And we’re losing badly.”

Trump then pivoted to dealing with China and other countries that manipulate their currencies to increase exports and said he would use “every tool under American and international law to end these abuses”.

He painted democratic presumptive nominee Hillary Clinton as a NAFTA supporter, a globalist and an agent of the status quo. There will no doubt be a rhetorical back-and-forth between Trump and the Clinton campaign. Western Pennsylvania is still strong union country and most are supporting Clinton, including the United Steelworkers. Yet the fact that companies such as Alumisource are now being sought out as campaign stops shows how much more important American manufacturing is seen to be, as an issue, this election cycle than it has been since at least 2000.

President Barack Obama’s campaign against republican nominee Mitt Romney in 2012 and Obama vs. John McCain in 2008 didn’t engender much discussion of tariffs, trade protectionism or the outsourcing of American jobs. With the exception of a comment that Romney made about Fiat-Chrysler planning to build Jeeps in China — which turned out to be correct — relatively little time was spent talking about American manufacturing at all. The 2004 contest between President George W. Bush and Democrat challenger John Kerry was a campaign focused squarely on foreign policy.

Towns such as Monessen and St. Clairsville, Ohio, (where Trump stopped later in the day) are worse off for it. Much of the billionaire businessman’s populist appeal, through the republican primaries and now in the general election, has come from the message that America’s manufacturing sector and its working class have been left behind by status quo politicians such as the Clintons and his republican primary rivals, as well. Some of Trump’s sharpest venom is, indeed, reserved for republicans who he feels haven’t gotten tough enough with rival manufacturing countries such as China and Mexico.

Not Your Father’s GOP

Attacking free trade, of course, goes 100% against GOP orthodoxy of the last 25 years and places Trump at odds with party leaders such as House Speaker Paul Ryan (R-Wis.) on the Trans-Pacific Partnership, a trade deal with 12 Pacific Rim nations that Obama supports. Clinton supported TPP when she was Obama’s Secretary of State, but she has come out against the pact on the campaign trail, mostly due to opposition to the deal by supporters of her toughest campaign rival, Senator Bernie Sanders (D.-Vt.), and even, perhaps, because of Trump’s popularity and success opposing it from across the aisle.

Trump and Sanders’ appeal as outsiders is a bit comical, sure, as both have been active in politics for the last 30 years. Trump as a fundraiser and celebrity endorser (one who once endorsed Bill Clinton for president and Hillary Clinton for U.S. Senate) and Sanders as a sitting Senator for nearly the entire time, but both seem to have captured the populist hearts of working class voters in spite of their pasts. The GOP, and probably the democrats, will have to take their populist factions a bit more seriously after seeing the victory of a similar, previously marginalized, nationalist party in the U.K.

It will be interesting to see what promises are made to U.S. manufacturers and what concrete proposals to balance trade will be made by both sides in the coming months. The Rust Belt has essentially been ignored by both parties for too long. Let’s hope the newfound attention brings real solutions and not just convenient political posturing.

PREVIOUS POST:
June Steel Price Forecast: Brexit and British Steel – What Will Happen?
NEXT POST:
Brexit is a Double-Shot in the Arm for Gold Prices