Home | Macroeconomics | While You Were Brexiting, China Keeps Devaluing the Yuan
Commentary

While You Were Brexiting, China Keeps Devaluing the Yuan

You wouldn’t expect the ripples to have spread quite this far, but Britain’s Brexit from the E.U. is lapping on the shores of the South China Sea and has forced the People’s Bank of China (PBOC) to intervene to “stabilize” the yuan in the face of a slump in the pound and euro and a surge in the U.S. dollar.

Chinese policymakers have guided the yuan to a 5.6% decline against an index of its trading partners this year as exports fell every month apart from March. The 13-currency gauge fell to a 20-month low last week as the PBOC continued its policy of “stability” while maintaining responsiveness to market forces — plainly such a policy can be contradictory at times, especially in times of volatility as we are now facing. 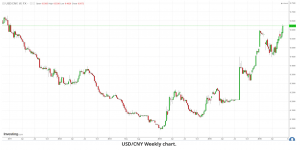 The PBOC, after years of gradual appreciation, has presided over a period of depreciation again in an attempt to help exporters, but an unexpected downward adjustment last August spooked markets and caused shares to fall causing an estimated $1 trillion capital outflow from the country as investors panicked, fearing the prospect of their assets falling in dollar values.

When Other Currencies Fall

Now, the PBOC is facing a pincer movement of a slumping euro, making yuan-priced exports less competitive and a surging greenback risking capital outflows. First the euro: some 15.6% of China’s overseas sales are destined for the E.U., of which just 2.6% go to the U.K., according to Bloomberg Intelligence.

Based on historical relations, a one percentage point drop in the E.U.’s gross domestic product growth could take 0.2% points off China’s GDP growth. On the greenback, safe-haven demand is making the dollar soar in value. Bloomberg said the yuan slumped 1.2% to a five-year low versus the U.S. currency since last week’s vote, and yet rallied 2.4% against the euro. All the major investment banks are predicting further easing in the yuan/dollar rate with most stating 6.7 is in the cards before too long. The PBOC has to be careful, faster declines risk reigniting a vicious cycle wherein expectations for further weakness quicken capital outflows.

Still, a weaker rate against the dollar remains the order of the day for now, and with all eyes west at the moment, the PBOC quietly set the USD/CNY fixing for Monday at 6.6375, the weakest fixing level seen since December 2010.

Brexit may be bad for the U.K., it is certainly bad for Europe, and it is proving uncomfortable even for China.

PREVIOUS POST:
Brexit is a Double-Shot in the Arm for Gold Prices
NEXT POST:
Architecture Billings Index Close to a 1-Year High in May