Home | Commodities | The EU’s Black Hole: How the UK’s Tax Contributions Will be Missed
Commentary

The EU’s Black Hole: How the UK’s Tax Contributions Will be Missed

Much of the focus so far, and nearly all of it gloomy, has been on the impact of the U.K.’s decision to leave the European Union at some point in the future. Most are proceeding with caution because, as yet, no formal announcement of intent has been given and the exit process will take a minimum of two years, so once the dust has settled both sides will dig in for a prolonged period of trench warfare during which the real work will be done, negotiating the exit terms.

Although most (apart from a naive few who are still gazing at the sunlit uplands of total independence) concede Britain will be worse off, at least in the short to medium term, not so much has been said about the impact on Europe.

Apart from the fact that the U.K. runs a massive trade deficit with Europe, Germany alone exports close on $100 billion a year of goods and services to the U.K., mostly cars and high-end consumer goods. The UK is also a net contributor to the E.U. budget. Net is the key word here, as Brexiters made much of a spurious £350 million a week figure that supposedly Britain paid to the E.U.

In fact, when the payments the E.U. makes back to British farmers — such as aid to deprived areas, support for research, etc. — the net figure is probably half that, but the U.K. contribution remains a significant part of the E.U.’s €145 billion annual ($160 billion) budget. 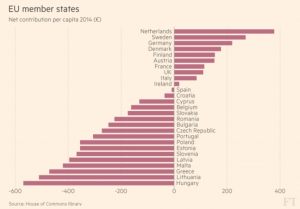 This chart from the Financial Times shows the contributions per capita, not the total contributions, so those countries in the upper section with the larger populations are the major source of funds – Germany, France, the U.K. and Italy 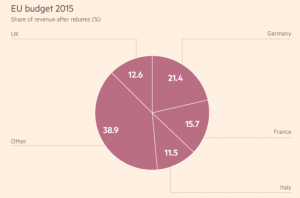 Deciding Who Owes Who What

Britain’s commitment to pay this each year could become the subject of a protracted legal case should a hard exit result in no form of close cooperation after the U.K. formally leaves but, either way, Great Britain’s exit will leave a hole that will need to be filled, either by the remaining members paying more, or taking less, or a combination of both.

Indeed, without Britain’s penny-pinching there will be one less significant voice pushing for fiscal thriftiness within the E.U. bureaucracy and its budget — this may be one reason why many in Brussels, at least, are not displeased by the U.K.’s decision to leave. Unfortunately for the E.U., continuing to balance the books is not a simple issue.

With 27 countries involved, the few major contributors are lined up against the many more net recipients. Geographically, this dichotomy is broadly northern states against eastern and southern ones. It will take a time to reach an agreement. Additional revenue-raising options that have been mooted by the European Parliament and others through the years include allocating revenue from the EU’s emissions trading scheme to the E.U., enlarging its share of value-added tax receipts or even imposing new taxes on the financial sector. One thing is sure for the bean counters, at least the U.K. — or at least its money — will be missed.