The second one is still based on expectations because, so far, we have yet to see those capacity shutdowns in China.

China’s Exports Are Up in June 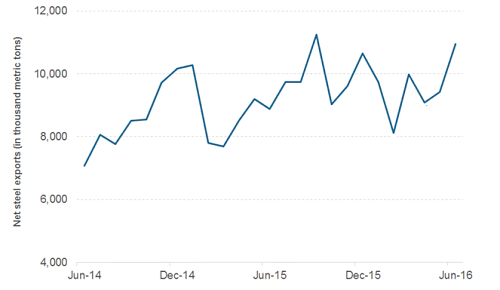 In June, China exported 10.9 million metric tons of steel, a 21% increase from June 2015 and the second highest total ever. The data raises questions on whether global steel markets will be able to absorb this much steel coming from China without it weighing on prices.

Yes, in the short term, but over the medium to long term the U.S. won’t be able to prevent buyers from accessing lower-priced steel in international markets

China, which produces about half the world’s steel, has been ramping up output since March as rising prices and improved demand encouraged mills to make more steel. China’s steel output rose 1.7% in June versus a year ago.

US Steel Prices Flatten Out

So far, domestic prices have been immune to the decline in Chinese steel prices, but they have flattened. It’s hard to tell if this loss of momentum means prices are just digesting this year’s gain before they continue higher or if this is actually the end of the year’s rally as global overcapacity remains an issue. After this pause, will domestic prices go up or down? That’s something we will monitor closely.