A recent series of data points suggests the U.K.’s decision to leave the European Union, while a step in the dark, may at least have the benefit of serendipitous timing.

After seven years of recession and then stagnant growth, the runes are aligning to suggest global growth may not be as fragile as many fear. In a recent Telegraph article mention is made of a number of measures that, on the whole, point toward a global economy that is picking up on multiple fronts.

Some regions will see a stronger pickup than others, but, broadly, all are pointing in the right direction. A monthly measure of global activity assembled by Fulcrum Asset Management suggests stimulus and fiscal measures adopted partly in response to the risks of Brexit — but more widely due to ongoing slow growth — have combined to create an increase in momentum over recent weeks. The numbers suggest we could see robust world growth of 4% annualized over the second half of the year, even if there is a hiccup in the U.K. This is up from 3.4% in the last quarter and 2.4% in late 2015.

The Bank of the World

The Federal Reserve‘s reluctance to raise rates on four occasions over the last year have helped lift confidence for those who have borrowed $11 trillion in dollars outside the U.S., at least for a while. The Fed is, in effect, acting as the central bank for the whole world the article says, giving a shot in the arm to an international financial system that is has never been so tightly-linked to the dollar or to U.S. borrowing costs.

Central bank actions may not be coordinated, but they have fortuitously coincided to create some momentum. The Japanese are launching a giant fiscal package — said to be in the region of 5.7% of GDP — while France, Italy, and other Eurozone states have taken advantage of the Brexit scare to end austerity more quickly than planned and to prime the pump of their economies.

More importantly, maybe, is South America where signs of stability are showing themselves again and China is set to see more robust growth as ongoing stimulus measures ripple out into the economy. Caixin’s PMI measure of manufacturing in China moved above the boom-bust line of 50 last month, for the first time since early 2015. New orders are said to be the highest in over two years with both consumption and manufacturing doing well. 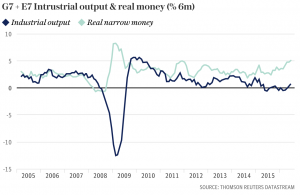 Various indicators suggest the money supply is strongly growing, usually a front runner to faster GDP growth. Broad M3 money growth points to a healthy world recovery for the next 12 to 18 months, rising to 5.3% annualized in the U.S. over the last three months, up from 4.5% over the preceding year. 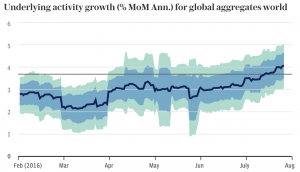 Much hangs on the next six months on both China and the U.S., the article says. Construction is booming again in China and although it is debt-fueled and hardly the form of long-term growth the country needs, it is turbocharging the rest of the economy.

Events in the U.S. are crucial, of course. Although headline growth slumped to 1.2% in the second quarter it is believed this was distorted by inventory effects and does not match up with other figures. Consumer spending was up a blistering 4.2% and new home sales reached 592,000 in June, the highest since the Lehman crisis. Mortgage applications are soaring. The U.S. labor market is tightening under almost all key measures and it is only a matter of time, some say, before this feeds into wage inflation.

To what extent this benefits the U.K. disproportionately remains to be seen, but high global growth should be good for an economy looking to build and diversify its trading partners around the world.