Older Vehicles in the Pollution Crosshairs in India 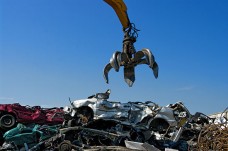 The decision to set up a modern, state-of-the-art auto shredding/recycling plant in India could not have come at a more opportune time. Many Indian provinces, led by New Delhi, are starting to come around to the view that older vehicles, especially those running on diesel, need to be banned.

Older cars pollute more than the ones that adhere to the India’s latest “Bharat Stage” (pollution control) norms. The Mahindra/MSTC joint-venture is also planned to be able to scrap ships and machines.

India’s National Green Tribunal (NGT) recently asked the New Delhi local government to deregister diesel cars 10 years or older. That’s a large chunk of the approx. 8.5 million cars registered in New Delhi, which would end up being either sold outside New Delhi or totally scrapped.

The number of cars sold in India was expected to grow from 2.2 million vehicles back in 2010 to 10.6 million units by 2020. At present, about 28 million vehicles are said to be over 15 years old and ready for the scrap heap.

The Indian Government was actively contemplating better policies in the organized and mandatory vehicle recycling business when this project came along. India had the potential to become one of largest car recycling regions, according to SteelMint Events, and the rise of recycling-friendly legislation was one of the topics to be discussed at the Scrap Recycling – Emerging Markets conference to be held in September in New Delhi.

The vehicle scrapping policy is formalized in legislation as the Voluntary Vehicle Fleet Modernization Plan (V-VMP). The bill is currently in its draft stage but, when passed, it would apply to all vehicles, regardless of engine type, bought on or before March 31, 2005. The Ministry of Road Transport and Highways (MoRTH) submitted the draft policy to the Ministry of Finance for approval. The government also recently proposed offering consumers an incentive of $375 for any passenger car handed in for scrapping to boost recycling rates.

When the policy is implemented, analysts predict about 28 million older, polluting vehicles will be taken off the roads. So, while automakers moan the NGT’s order on diesel cars in the short term, in the long-term, companies such as Maruti Suzuki India Ltd. are very happy that the policy means sales of more cars.

Maruti Suzuki India Ltd. is India’s largest car maker. It believes the local car market will reach 5 million units in annual sales by 2020, making the country the fourth-largest market in the world, if the V-VMP is passed.

The automaker’s forecast is in line with the central government’s Auto Mission Plan II that forecasts the passenger vehicle (PV) market to more than triple to 9.4 million units by 2026 from 2.8 million now if the economy grows at an average rate of 5.8% a year. If the economy grows at an average yearly pace of 7.5%, the size of the passenger vehicle market is forecast to rise to 13.4 million units, making it the world’s second-largest after China.