Renewable energy technology has been split into two camps since it became a reality around the turn of the century.

On the one hand there are the passionate environmental believers for whom the inflated subsidies were an irrelevance in the face of saving our planet, and on the other were naysayers for whom the arguments about global warming were a plot by the far left to raise taxes or run some kind of tree-hugging environmental agenda at the expense of business and consumers.

Neither polarized position was fair, of course, and the quiet majority in the middle have watched the technologies become progressively more efficient and costs fall dramatically while the extremes of global warming horror stories have been discredited, but the hard science of gradually rising carbon levels has been widely accepted.

Who Cares Why The Temperature is Rising?

In the process, a wider acceptance has gained ground that global temperatures really are rising and whether it is part of a natural cycle or man-made is not a risk we can afford to take. Ultimately, action to reduce carbon emissions will be cheaper than many possible downside scenarios if left unchecked and most people would accept we are making a mess of our environment and really should behave more responsibly.

Meanwhile, politicians have been plowing our taxpayer money into supporting wind, solar and a number of other “renewable” technologies, with some degree of success. Costs for the major energy sources — solar and wind — have fallen, partly as a result of technology improvements and partly due to economies of scale, to the point now where private firms are signing up to invest in major wind projects for a tariff of just $100 per MegWatt/Hour (€90 per mw/h). Indeed, in Europe all the extra power capacity added since the mid ’90s has been renewable. 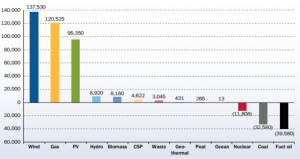 The biggest hurdle renewables now have to overcome is not the cost of production, but the curse of intermittency. Where does the power come from when the wind doesn’t blow or the sun doesn’t shine?

The Cost of Decommissioning

Up to now, that has required the maintenance (and, indeed, here in the U.K., the planned investment in) baseload power capacity. Sometimes this has meant extending the life of aging nuclear power plants and sometimes new gas-fired plants which have greater flexibility to be turned on and off but which have a carbon cost of their own.

In the U.K., a fierce debate has been going on for several years about the replacement of aging nuclear power plants such as Hinckley Point in Somerset, England and Bradwell at the mouth of the River Blackwater in Essex at a huge capital cost. A capital cost that has risen dramatically at every reevaluation and which can only be supported by a massive guaranteed strike price of $120 per mw/h (£92.50 per mw/h) for 35 years.

Worse, that figure gets adjusted for inflation and is already looking more like $125.44 (£97) per mw/h, and rising. Whether recognition of the progress energy storage is making and the transformational impact a major breakthrough could have is influencing the British government’s announcement this month that it is undertaking a review of whether to go ahead or not on the nuclear projects is unclear, but it certainly raises questions as to why would you commit to such a high strike price for 35 years if the technology is likely to be totally uneconomic by the time it even starts generating electricity?

Efficient and cost-effective energy storage could allow intermittent power sources such as renewables to play a baseload role in energy delivery. It has been the holy grail of renewable energy ever since the technology began to take off, but lack of cost-effective, efficient technology has held the whole sector back. The U.S. government is not alone in recognizing this, but it is leading the way in research and development to find solutions.

According to the Telegraph, the U.S. Department of Energy is funding 75 projects developing electricity storage, funding research at Harvard, MIT, Stanford, and the elite Lawrence Livermore and Oak Ridge national labs in a bid for achieve a breakthrough. Many of these projects can be tracked at the Advanced Research Projects Agency-Energy  website (ARPA-E). There are plans for hydrogen bromide, zinc-air batteries, storage in molten glass, next-generation flywheels, to name but a few with many claiming “drastic improvements” that can slash storage costs by 80–90%. In reality, most will not see the light of day, but that is the nature of cutting edge hard science. You have to kiss many frogs before you find your prince.

The potential for industry is huge, a Mckinsey estimate that the energy storage market will grow a hundredfold to $90 billion a year by 2025 with as yet unforeseen potential for the metals industry, depending on which technologies prove to be the most successful. If electric vehicles finally begin to gain some sales traction maybe a low-carbon future really is attainable at acceptable cost.