The commodities sector is suffering from lackluster prices, weak demand and, in many cases, overproduction but one sector is on the up, and that’s precious metals. Particularly gold and silver prices.

According to the Financial Times, gold and silver have been among the best performing metals during 2016, powering a sharp rally in stock prices and helping miners ease concerns over their finances.

Since the start of the year, gold has risen 27% while silver is up 46% giving more scope to the sector to return to dividend payments. 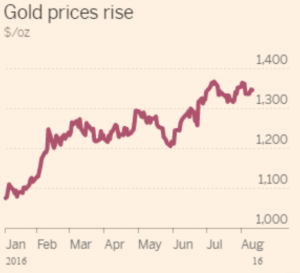 Many miners cut dividends after the price of gold, which peaked at about $1,900 in 2011, started to fall sharply in 2013. Although gold miners were not alone, they did take action early.

Bulk miners like BHP Billiton and Rio Tinto Group kept large dividend payments flowing until just a year ago but gold miners saddled with debt taken on to fund capital investments were, in many cases, facing a shaky future as the gold price plummeted. However, mining firms have since reduced costs dramatically, shoring up their balance sheets and reducing debt.

Gold miners such as AngloGold Ashanti, the world’s third-largest gold miner by volume, is expected to tell investors this week about its plans to resume a dividend, which it last paid in 2013.

Betting on a return to dividend payments, the investor community has been piling into both gold mining shares and gold ETFs this year. Gold and silver funds have topped the list of best-performing investment products so far, in spite of a stronger dollar that is usually bearish for commodity prices. 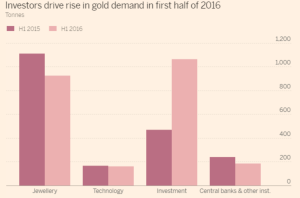 According to another FT report, investors in the Placeuro Gold Mines fund, the third-best performing fund in Europe this year, lost 21% in 2015. However, the fund returned 176% in the seven months to the end of July.

Gold demand is up but mostly due to the aforementioned investor demand. Overall demand for gold rose by 17.6% in the first six months of 2016 to 2,335.5 metric tons from the same period in 2015, according to data from the World Gold Council. Investor demand for the metal jumped by 126.8% on the same basis to 1,063.9 mt, the highest total on record for the first half of a year. Jewelry, though, was depressed by the resulting higher prices resulting in demand falling to 952.2 mt in the first half from 1,110.8 mt from the same period in 2015.

Gold prices have been supported by a general nervousness about the global economy. Brexit and the path of future interest rates have caused investors to park their money in safe havens, while a current period of stability has seen a modest easing in prices, most market observers are expecting continued price support in the second half of the year.