So is the case with China’s export rebate scheme, the original rebate of tax on export of value-added products had a certain logic to it. China is not a low-cost producer of power and to support all exports of energy-intensive metals such as aluminum was a senseless act, while supporting exports of higher value alloys and forms had a certain logic for a country looking to develop its indigenous technology and capability to supply a rapidly growing domestic and regional market.

Supporting exports of unwrought metal, it was deemed, was tantamount to subsidizing the export of energy as a third of the cost of unwrought aluminum is made up simply of electricity costs, so exports of unwrought metal incur a 15% export duty whereas exports of value-added categories attract up to a 13% rebate of VAT costs. So, China split its subsidies scheme based on the harmonized tariff system supporting products falling in the value-added categories but not the basic 76.01 Unwrought Aluminum category of material suitable only for re-melting.

But however well intentioned the original position was, that is a market distortion and markets have a tendency to react to distortions and to game the system if given the opportunity, and that is exactly what has happened in China.

Aluminum exports have mushroomed in recent years and a portion — a difficult to measure portion but ROW producers variously claim it is a significant and market-depressing portion, possibly 15-20% of total semi’s exports — has been unwrought metal simply looking for a home as primary metal for re-melting but classified and supported by subsidies as a value-added grade.

A post by our editor, Jeff Yoders says the U.S. has had enough and is consulting other governments on proposed changes the U.S. has drafted to the Harmonized Tariff Schedule (HTS) to reclassify fake semi-finished coils under HTS header 76.01. As this table from the UK tariff (they are the same the world over, hence the “harmonized”) shows that would move “Aluminum plates, sheets and strip, of a thickness exceeding 0,2 mm” into the unwrought section. 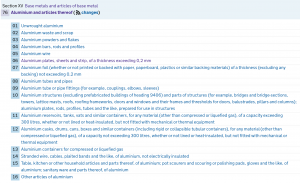 The article suggests the majority of incorrectly classified material is as coils, but of course if only coils are moved to .01 status there is a real risk producers will simply switch to producing re-melt grade metal as plates or even a different category such as .04 bars.

The proposal is still in draft form and must be approved by the World Customs Organization before it could come into effect, a change that is unlikely before next year, if at all. Needless to say if approved, the proposal would dramatically increase Customs officials’ workload since they would need to take additional steps to verify items arriving at port are truly aluminum alloy products as labeled.

The article suggests one simple measure for officials is to see if material is packed and adequately protected. Aluminum sheets and coils rapidly deteriorate to the point they are useless if not adequately packed and protected during storage and shipment, yet the process is expensive, probably too expensive to be worth doing to material being sold at low prices for re-melt. The suggestion is customs officials could open containers and do a quick packing check to help verify if material is correctly classified, however this raises the question why don’t they do that now. If rampant gaming of the system is going on that would be a relatively simple check and does not require a change of the HTS codes.

You can be sure if a change is approved there will be distortions to the market. Pressure one part of the balloon and it bulges somewhere else. Yet again a well-intentioned change could cause unintended consequences elsewhere. Maybe it would be better to leave the HTS as it is and just increase customs checks. Why not take the path of least resistance?