Copper prices fell to their lowest level in two months on the London Metal Exchange Wednesday. Copper started the year bullish, but ever since prices have struggled near $5,000 per metric ton as investors seem unwilling to chase prices higher.

Weaker Chinese imports over the past few months and the bearish calls of some major banks have contributed to the recent price fall. Unlike other base metals, sentiment on copper is still sort of bearish, making this metal the worst performer among its peers this year.

China isn’t self-sufficient when it comes to its copper needs and is the largest importer of the red metal. Rising Chinese imports signals increasing demand for the metal. In metals like zinc and nickel, we’ve witnessed a surge in Chinese imports this year, adding fuel to their bull market. 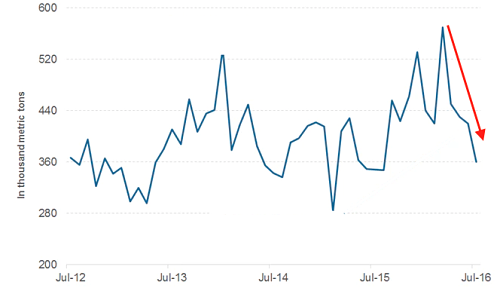 In Q1, China’s copper imports were running at record levels but for the past few months, figures appear smaller. In July, China imported 360,000 mt of unwrought copper and copper products. A year-over-year increase of only 3.4% and the fourth consecutive month in which imports have fallen on a monthly basis. Moreover, July imports are at their lowest level since August 2015.

Unlike zinc and nickel, we need to remember that we pointed out earlier this year that the increase in Chinese copper imports in Q1 wasn’t exactly backed by end user demand. Some of the Chinese refined copper imports found their way into the Shanghai Futures Exchange system, with inventories rising to record levels.

As a result, China’s refined copper imports started to taper down in May. The combination of rising domestic smelting production in China and high inventory levels explains why imports came in weaker than expected in recent months.

Copper is among the metals where China actually gains if prices stay lower, unlike aluminum or steel. The country is the largest copper importer. Therefore, lower copper prices bode well for China. This also helps explain why Chinese copper imports rose this year. When prices are low it makes sense for China to import more copper instead of producing more domestically.

Some banks are pretty bearish on copper. Goldman Sachs forecasts copper prices at $4,200 in six months and $4,000 in 12 months as a wall of supply hits a stagnant demand market. HSBC is also predicting surplus and industry analysts agree that 2016 has been the year for which mine supply has been the least disrupted over the past 10+ years.

Any price rally could continue to be limited this year, especially if Chinese demand does not pick up and we see an increase in supply, as Goldman Sachs is forecasting.

That said, this wouldn’t be the first time Goldman Sachs’ prediction is off. The bank projected massive aluminum overproduction in 2016 and contrary to this prediction, aluminum markets were in a record deficit in 1H16. For this reason, copper buyers would be better off by having a purchasing strategy instead of relaying on predictions.

PREVIOUS POST:
Iron Ore Prices Defy Gravity, But For How Long?
NEXT POST:
India Places Anti-Dumping Duties on… Just About All Steel Products