Iron Ore Prices Defy Gravity, But For How Long?

Iron ore prices have done an amazing job of defying gravity, the price has risen 41.7% this year after three straight years of losses according to Australia’s Business Insider. 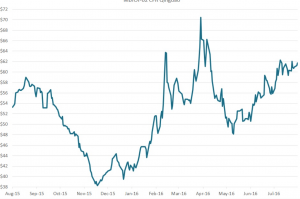 The raw material has variously been called the darling of the commodities market and by Citicorp as 2016’s hot commodity but many are now beginning to ask if enough is enough and just how much support there is for current price levels let alone further rises.

Price strength has been a product of two interdependent drivers. On the one hand, iron ore prices largely followed a rally of Chinese steel prices. Prices rose as a result of strong property (new) starts and stimulus-inspired infrastructure investment and robust growth in sectors such as auto production caught the market when inventories were low. As finished steel prices increased, mills went into overdrive churning out steel like it was the turn of the last decade.

On the back of a credit surge — itself a product of the stimulus measures — speculative trading in iron ore, steel and coal reached fever pitch driving up futures prices. In the face of rising steel prices, steel mills and regional governments have staunchly resisted attempts to curtail production saying if there was excess capacity, prices would be falling not rising.

Unfortunately, good times don’t last forever and, for iron ore producers, their good times may be coming to an end. Low-cost iron ore supply remains plentiful with Vale SA‘s new S11D project due to come onstream by the end of this year and Roy Hill’s ramp up hitting the market at around the same time.

Simultaneously, China’s stimulus is fading. After the first sugar rush, construction is said to be slowing and with key international gatherings imminent — like the G20 summit — when steel mills are asked to close to reduce pollution in China it is likely thought that steel demand will ease in Q4 as the current building season comes to an end.

Iron ore inventories at seaports are up with plenty of raw material around many are expecting a softening in both iron ore and steel prices in Q4. To the extent this translates into increased exports of unwanted metal this could then become more of a problem for the rest of the world than for China. Steel exports have been a major source of international tension for the last two years. if exports rise on the back of slowing domestic demand this particular flashpoint is going to get worse rather than better in 2017.