Steel production in China, the world’s biggest supplier and consumer, will likely contract this year and shrink further in 2017 as local demand slows, according to Li Xinchuang, a vice chairman at the China Iron & Steel Association.

“There will be significant declines in the next three months,” said the influential Li, who’s also dean of the China Metallurgical Industry Planning & Research Institute, in a phone interview with Bloomberg News. “If steel consumption and production are set to decline, then there’ll definitely be less demand for iron ore.” 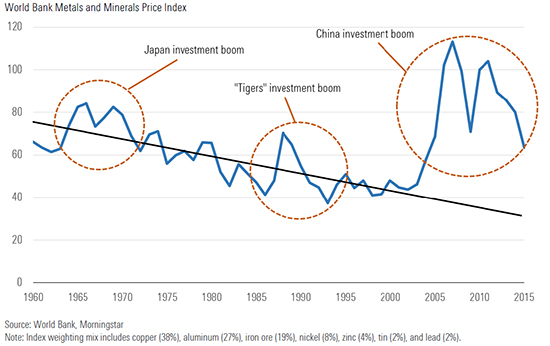 Metals and minerals are actually in a decade-long down cycle. Source: Morningstar/World Bank.

“Our original estimate was for a 3% decline this year,” Li told Bloomberg. “Based on how things have played out this year, I think the decline in output might be less than anticipated but the downtrend remains unchanged. Iron ore should be on a downtrend, not on an uptrend.”

This falls in line with many public statements from Beijing that have said China will get serious about curtailing production in the second half of the year and also reduce stimulus measures to the sprawling Chinese carbon steel industry. Citigroup, UBS Group, Morningstar and others are predicting a fall in steel prices and iron ore, as well, as demand wanes in the world’s largest consumer. This group includes James May of Steel-Insight, a MetalMiner contributor.

Morningstar’s Andrew Lane recently cautioned that steel is one of many metals and minerals in a decade-long decline. The investment research firm also pointed out that China’s excess capacity equates to nearly 4 times actual steel production in the U.S. in 2015, so the resilience of loss-making capacity in China reflects the heavy involvement of local governments eager to support employment, GDP, and tax revenue rather than optimize profitability.

Whether Li is right and China actually cuts back in the second half — through mergers, closures or other instruments — the odds against steel prices continuing to increase, globally, are still long.