Home | Commodities | Reshalience: US Tight Oil, Gas Far From Being in Decline
Commentary

Reshalience: US Tight Oil, Gas Far From Being in Decline

The Saudis counted them out. So did the Russians, even many domestic analysts said North American shale and tight oil and gas production would decline in the face of low prices an that investment would dry up and output would fall.

Well, guess what? They have all been proven wrong. Sure, rig counts have dropped and there have been painful layoffs of workers, but the industry is surviving and against all the “experts” advice production of natural gas from the Marcellus and Utica shales of the U.S. Northeast is averaging 22.63 billion cubic feet per day in August, according to a Financial Times article.

That is up 2% from July and the most since February’s all-time high of 22.78 billion cu-ft/d. Despite earlier U.S. government forecasts that combined gas output from the two shale areas lying beneath Ohio, Pennsylvania and West Virginia would decline, producers have managed to maintain volumes by tapping inventories of drilled but uncompleted wells and burrowing deeper, longer wells that yield more gas.

Even though the number of drilling rigs has declined, technological developments have helped producers increase output. New production per rig now averages about 11.4 million cubic feet of gas in the Marcellus, an 18% improvement from a year ago, according to the article. Nor is this being driven by a bounce in prices. Quite the opposite as prices remain depressed. Gas at the Dominion South trading hub in Pennsylvania sold for $1.2757 per million British thermal units this month, less than half the price for benchmark gas in Louisiana as producers, merchants and utilities jockey over a limited pipeline system.

As a result of cost reductions, exports are a viable outlet for U.S. tight gas producers with Cheniere Energy‘s Sabine Pass plant shipping seven cargoes this year to destinations such as Argentina, Chile, Brazil, India, Portugal and, get this: Dubai and Kuwait!

This ranks alongside the old saying of shipping coal to Newcastle — at the time a major coal producing region. The Middle East sits on some of the largest gas reserves in the world but soaring demand and a lack of investment in extraction and liquefaction makes U.S. LNG more competitive than local production.

Nor is this success story limited to natural gas. Tight oil production has remained robust in spite of the pundits predicting its demise. Drilling practice and technology improvements have allowed U.S. tight oil producers to lower costs and remain viable to the point where U.S. tight oil investments are now more attractive than deep-water oil projects in places like Africa. A different article says average costs per barrel have dropped by 30 to 40% for U.S. shale wells, but just 10 to 12% for other oil projects, 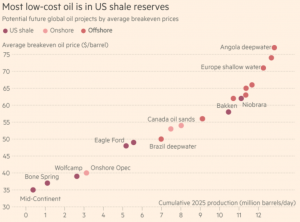 Investments in the Eagle Ford shale of south Texas on average need a Brent crude price of $48 a barrel to break even, while projects in the Wolfcamp formation in the Permian Basin in west Texas need $39, creating opportunities for new investment to come into the industry if prices can show a sustained yet modest uplift from existing levels.

While a drop in drilling activity has been a hit for steel producers, component makers and engineering support services, the latest reports suggest the industry is far from in decline and it would not take much of an oil price rise for investment to flow back into the industry.