The annual jamboree for central bankers at Jackson Hole, Wyo., is always a cause for considerable speculation in terms of clues that may be dropped as to future policy direction, particularly from the Federal Reserve.

Every word of the Fed Chairman address is keenly shifted, every nuance carefully weighed to see what clues it gives to future policy direction. This time is no different but markets have been curiously sanguine since last month after considerable volatility earlier in the year. The Vix volatility index slid to its lowest level last week since August 2014 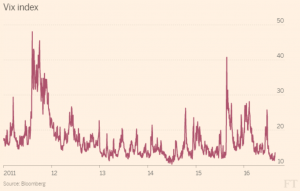 That is peculiar because the direction of interest rates at the Fed has been the cause of considerable volatility for emerging market exchange rates, bonds and precious metals in recent years.

Fears of premature rate hikes have sent markets into a right tizzy over the last two years, so why the lack of interest this time around? Well, in part it seems global markets have come around to thinking rates will have to stay lower for the foreseeable future because global market growth is so weak, another is markets have learned not to believe the Fed’s forward guidance, it has been proven wrong on so many occasions over recent years that many are becoming immune to their announcements.

A policy ambition announced by the Fed at the beginning of this year — projecting that rates would be raised four times in 2016 — has proven false. The markets have been so fragile that the Fed retreats at the slightest sign of a threat to growth.

If anyone was expecting Janet Yellen to announce at Jackson Hole when the next Fed interest rate increase would take place, he or she was living in cloud cuckoo land. She was not going to do that, but she did leave the door open for a possible rate rise at the September 21 Federal Open Market Committee meeting depending in large part on September’s jobs report.

U.S. economic growth was revised downward to 1.1% for Q2, from an earlier 1.2% but unemployment at 4.9% is as close to saying the U.S.A. has full employment. in all previous recoveries, even poor ones, low unemployment has preceded a rise in inflation.

Yet, inflation is at the core of the problem. It has remained stubbornly low, as low in fact as growth. Consumer spending remains solid, growth — while weak compared to previous recoveries — has remained positive and been accompanied by falling unemployment. Yet, the worry persists not so much that inflation is going to take off in an uncontrollable way, or that ultra-low interest rates are going to encourage speculative and wasteful activity — it has already done that — it is that the Fed has nothing left in its toolkit to fight the next downturn, and downturn there will be sooner or later, there always is.

Indeed, the more interesting part of the discussion at Jackson Hole was about longer term monetary policy. According to the FT, behind discussion about new monetary tools is a big shift in thinking about longer-term growth. The paper says following the lead of economists including Lawrence Summers, some analysts now argue that aging populations, slower productivity growth and a reluctance around the world to spend and invest have propelled advanced economies into so-called secular stagnation.

Quantitative Easing, arguably, had some benefit when first applied after the 2008 financial crisis but the impact of its application has weakened as time has gone by and interest rates have sunk to near zero. There’s little incentive for traditional saving.

Some countries, such as Japan and parts of Europe have controversially played with negative interest rates, but found even this extreme step has largely failed to have any beneficial impact. Faced with having to pay to keep money, deposit banks’ profits have been hit and companies have simply returned money to shareholders (who have hoarded it) rather than invested in new plants and equipment.

In the short term, the Fed is handling two broad and apparently conflicting messages another FT article says. It is both reducing its view of the longer-term outlook for the U.S. economy — and, as a result, paring back its estimates of the level official rates will eventually reach — while insisting it remains on track to deliver further rate increases in the short term.

The conundrum was highlighted, the FT, says in Yellen’s speech. She suggested that amid sagging productivity growth and abundant global savings the Fed’s “terminal rate” might be closer to 2% than the 3% median projection released in the central bank policymakers’ most recent estimates. This is much closer to the market’s own view on where the “neutral,” long-term U.S. interest rate should be.

By “neutral,” the Fed means the point at which lower rates are expansionary and rates over that level are seen as causing contraction or suppressing growth. If that is correct, then the current policy is not as inflationary as believed and rates could remain lower for longer without the risk of the economy overheating down the line.

In the short- to medium-term, though, overheating is not the problem, more of a worry is in if global economies slip into recession later in this decade they have little left in the tool kit with which to fight it.

This “recovery” has gone on for some seven years now. It is one of the longer running post-recession recoveries and the weakest, but as Barry Ritholtz points out in Bloomberg View this month, the financial crisis was not your typical boom and bust cycle, it was a recession bought on by a credit bubble and banking crisis, and typically those take a lot longer to overcome.

It’s more akin to Japan in 1992, which led to 10-or-more years of stagnation that arguably Abenomics is still struggling to overcome. It is testament to  U.S. economic dynamism that it has managed to improve employment and achieve steady if mediocre growth to the extent that it has. Without the benefit of fast-expanding populations or a new China going through industrialization the world may have to get used to slow growth. This may be as good as it gets.