There is a delicate game of cat and mouse, feint and counter feint, smoke and mirrors going on among oil producers universally suffering from low oil prices.

On the one hand we have Saudi Arabia, the architect of the current low-price environment which started pumping oil at record levels specifically to grab market share in the face of growing U.S. shale production and the return of archenemy Iran to the market after years of sanctions. The low prices that resulted have caused pain for all producers and driven some heavily oil-dependent economies to the brink of collapse.

Talk of a production freeze in the early part of this year got everyone excited and the crude price rose, only for Saudi Arabia’s powerful deputy crown prince, Mohammed bin Salman, to throw cold water on the idea if Iran was not willing to be a part of any coordinated freeze.

The Arabian Stallion and the Russian Bear

Since then, all parties have tried to tough it out. Saudi Arabia, with the largest sovereign wealth fund, has managed to maintain appearances but is still trimming budget deficits, burning through reserves and talking of selling its crown jewel, Saudi Aramco.

Russia has been partly shielded by a collapse in the value of the ruble that has partially compensated domestic budgets from low crude prices but is still desperate to achieve higher returns. Some 40% of the country’s revenue comes from oil and natural gas and the economy has languished in recession territory for the last two years. 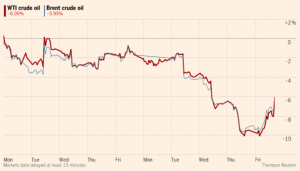 It has taken five months but all the parties are now maneuvering to have another go at a production freeze in the hope that it will push up prices. Talk of a “task force” pact between Russia and Saudi Arabia was enough to drive the oil prices up in a matter of minutes last week.

The price rallied from around $46.50 a barrel last Monday morning to just below $49.50 but quickly fell back below $48 a barrel within minutes of a joint statement from Moscow and Riyadh which said the group’s first meeting would not take place until October.

Saudi Arabia’s oil minister Khalid al-Falih has officially maintained the position that any freeze must include Iran and has denied any discussion is taking place to agree a freeze, but Russia’s Energy Minister, Alexander Novak, said talks were ongoing and went further to say Iran should be given a special dispensation to raise production to pre-sanction levels before being asked to take part in a freeze.

What Can Iran Do?

This may be easier to achieve than in the past. Iran is already at 3.85 million barrels per day and only just exceeded 4 million barrels before the sanctions were applied, so it is almost there. Indeed, there is much speculation that Iran cannot raise its production any further in the short term without significant outside technology and investment, so it would be a token capitulation for them to agree to freeze at, say, 4 million barrels. If that cleared the way for a “freeze” by OPEC and non OPEC producers like Russia that may be all that would be required to cause prices to rise.

Price Comeback? Don’t Count On It

Don’t for a moment, though, think that means a return to $100 per barrel. The world is still awash with oil. Saudi and Russia would be freezing production at record levels, Iran and Iraq are each producing around 4 million barrels a day much of which wasn’t there a couple of years ago and any significant rise in price will see a resurgence in U.S. shale oil production into an oversupplied market.

U.S. Department of Energy data showed high levels of oil stockpiles. Commercial crude oil stocks rose 2.5 million barrels to 523.6 million barrels, signaling a persistent supply overhang according to the Financial Times. Think more like $50-60 as a range. The Russian’s have said they would be happy with that in the short term, and it would represent a 20% increase in revenues from this year’s levels.

Still, these talks look more widely supported than the abortive discussions earlier this year, not least of which because Russia is involved. All parties are feeling the pressure and that is encouraging some investors and analysts to think this time it will be different.

Those exposed to oil price inputs should be wary. Volatility on a day-by-day, or week-by-week basis is likely to be the order of the day for the balance of this year. All parties are playing a delicate game of talking up the market without giving anything away to other producers in terms of agreeing to a freeze for themselves, but allowing others off the hook. In such an uncertain situation, rumor and expectation drive markets, as we have already seen over the last few days.