Earlier this year, China promised it would cut steel capacity. However, despite friction with several trading partners, Chinese exports continued to look strong in the first half.

China’s Vice Minister of Industry said in July that the country will step up efforts in the second half. The minister pointed out that focus of their work in the first half was mission planning, and in the second half they will step up implementation and enter a new stage, from allocating targets and drawing policies to actually pushing capacity cuts. 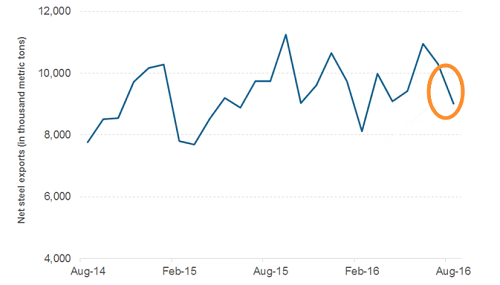 Following those comments, exports started to taper down. In August, China exported 9.01 million metric tons of steel, a year-over-year decline of 7.4%. Other than capacity cuts, the anti-dumping duties that many countries have slapped on Chinese steel products are contributing to this decline.

Is This Good News For US Steel Makers?

Chinese exports were the biggest concern for U.S. Steel companies last year but, thanks to trade cases, Chinese exports are not a real issue anymore. Indeed, China accounted for less than 2% of U.S. imports in July. The decline in Chinese steel exports is a welcome sign for the global steel industry but the real risk now for U.S. makers is rising steel imports from other countries, which have already started to pick up.

Prices in China held fairlu well in July and August. If prices in China continue to hold well thorough the rest of the year, that should put a floor on the recent decline in U.S. prices. On the other hand, if prices in China weaken, that would have a depressing effect on U.S. prices too. At the end of the day, the supply/demand balance in China will be what determine the fate on U.S. steel prices.