Strongbow! Poldark! Buy Yourself a Bit of Tin Mining History

The tin market, along with nickel and zinc, has been a standout performer this year.

Whereas copper, aluminum and other ferrous metals have languished due to oversupply, the tin price has risen steadily and robust demand has met a constrained supply market. According to the World Metal Statistics August report, the tin market recorded a deficit of 7,200 metric tons during January to June 2016. That’s less of a deficit than in the equivalent period in 2015, true, but still a deficit and with no DLA deliveries during the period total reported stocks fell by 2,600 mt during June. In spite of rising production of refined metal in Asia, a 12.6% increase in demand from top consumer China kept the market under pressure.

Against such a backdrop, the reopening of previously abandoned mines is not unexpected. What does raise an eyebrow is the tactics of one junior miner in employing the image of the hit UK BBC period drama “Poldark” in trying to entice investors onto its $150 million fund.

Strongbow Exploration is invoking the romance of the series set in the 18th century mining industry of northern Cornwall to buy-a-bit-of-history, according to the Telegraph. The TV series featuring the dashing Aiden Turner and delectable Eleanor Tomlinson has been a massive hit here in the U.K. — and may prove equally popular to the “Downton Abbey” series once it’s rolled out around the world. It’s just starting its second series (or “season” to you Americans) with even higher viewing numbers. 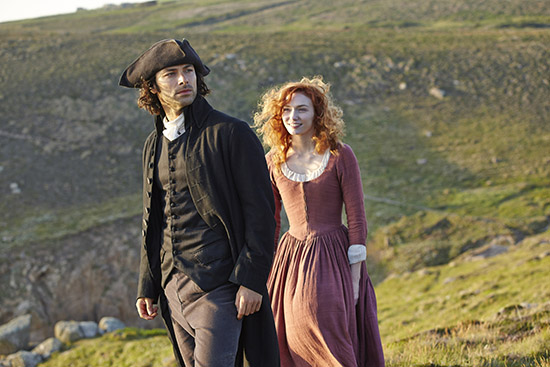 “One Day, this will all be yours.” “What, the curtains?” “No, all that you bloody see!” Poldark is taking audiences by storm and igniting memories of romantic tin mining. Image courtesy of PBS/Masterpiece.

Strongbow may well raise its capital on the romantic idea of buying into a 400-year-old mining tradition, but hard-nosed investors may like to know that with modern recovery technologies, Strongbow’s South Crofty mine has at least a 10-year lifespan.

The tin reserves are said to be of higher quality than many comparable projects around the world and South was active up to the end of the last century when it failed in 1998 after the tin price collapsed. Mining permits exist to work the reserves to 2071 apparently although Strongbow will be long gone by then.

The Romantic Tale of Tin Mining

South Crofty is not alone, the mine is just one a dozens of mines in the area that have been worked for hundreds of years yielding not just tin, but copper and silver. We wrote last year about plans to reopen the Hemerdon tungsten and tin mine in southwest Devon, that are now close to production. If Strongbow can get this project off the ground — or underground may be a better expression — it may be tempted to look for additional opportunities.

Cornwall, as the Poldark series so romantically portrays, has a long history of resource extraction. Where once it was based on the limits of human labur and crude refining, today better technologies in both areas make previous “exhausted” resources potentially viable again. Go on, buy yourself a bit of history, just don’t be tempted like the series hero Ross Poldark to strip to the waist and pose for the cameras…. there are limits to buying into your slice of history.