Welcome back to the MetalMiner week-in-review! This week we’ve got in-depth reporting on China and market economy status, India getting tough on aluminum imports and Canada… well, you’ll see what happened in Canada.

We Know Gold Prices Have Gone Up… Butt This is Ridiculous

After a trial that concluded in Ottawa on Tuesday, Leston Lawrence, a 35-year-old employee of the government mint in Ottawa, stood accused of foiling the facility’s high security and smuggling out 18 7.4-ounce pucks — this is Canada, after all — worth about $6,800 each. He sold most of the pucks, cooled into the size of a purity testing dipper used at the mint, to an Ottawa Gold Sellers retail store at a nearby mall. The accused criminal mastermind also had four more of the pucks in a safe deposit box. 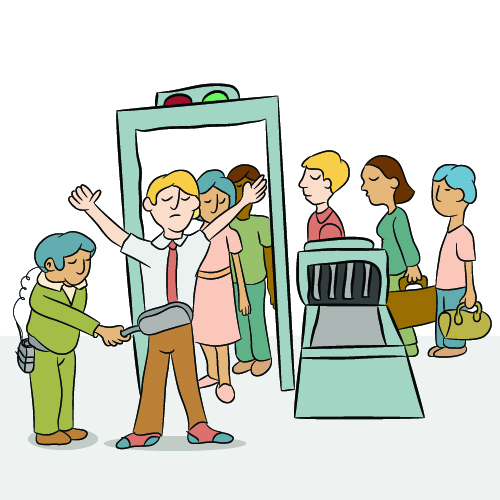 “Go ahead, scan me with the wand. Nothing to see here.” Source: Adobe Stock/John Takai.

The question the Royal Canadian Mounted Police, or the Mint, couldn’t figure out is how he got past the state-of-the-art security that featured full-body metal detectors and secondary screenings with a wand for anyone that tripped the first scan?

Before Lawrence was fired from the Mint and arrested in 2015, investigators also found a tub of Vaseline in his locker. While the wand scanners can pick up even small pieces of metal in a person’s clothes, security officials from the Mint said they probably would not detect dipper-sized gold pucks that were forced between someone’s buttocks using the vaseline.

Imagine being the teller the pucks were sold to? Officials said at trial that Lawrence tripped the initial full body scanners more than any other employee during the period when they believe the thefts occurred, but he always passed the secondary wand scan.

The Canadian Crown corporation mints coins and houses a refinery as well as a precious-metals storage facility. It was Lawrence’s job, as a refinery worker, to test the purity of the pucks in the buckets. He may have been testing them even more closely than his job required.

Now for something completely different, MetalMiner has been researching and writing about the effects Market Economy Status for China could have on the U.S., international markets and the global steel industry as a whole for more than a year now.

Check out part one of the interactive MetalMiner project, “Why China Market Economy Status Matters.” “China vs. The World,” was published yesterday. If anti-dumping, international intrigue and World Trade Organization designations of trade status are your thing — and they’re definitely ours because we’re big-time metals nerds — then do we ever have the interactive story for you!

Meanwhile, both the U.S. and India are rumbling about getting serious about protecting their native aluminum industries from Chinese imports, just like they protect domestic steel.

India is proposing a minimum import price just like it has for steel. The U.S.-based Aluminum Extruders Council has said China Zhongwang’s takeover of Aleris “raises very serious concerns for the entire aluminum industry,” and is trying to mobilize support to block further Chinese penetration.