Copper has been on a bit of a roll this month. After a quiet summer, investors have been looking at growing concentrate imports in China and increased refining to pure copper as signs that Chinese demand is picking up.

A recent article by Reuters throws some light on what is going on behind the scenes that suggests while demand from refiners is robust, it does not mean demand from China’s consumers is equally as strong and rising imports should not necessarily be seen as a bullish sign for copper. 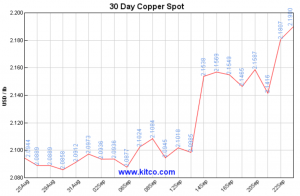 “Chinese copper buying picked up at the end of August as the market returned from the long summer break, helped by the arb window reopening, and prompting a bounce in physical premiums,” Citibank is quoted by Fastmarkets as saying.

But Reuters, delving more deeply into the import/export and inventory numbers, paints a more complex picture than simply apparent demand. The paper estimates China’s apparent consumption — a rough calculation factoring in production, imports and visible stock movements — jumped an impressive 11% in the first half of this year. But Reuters then goes on to caution that real consumption is not anywhere near that level, suggesting a middle ground estimate would be more like just 3%.

So, what’s going on? Well, for one, remember that imports of concentrate are up dramatically, at 1.45 million tons (bulk weight, not copper contained). They were the third highest on record in August, beaten only by December last year and February. More impressive, still, cumulative imports of copper concentrate have risen by a staggering 34% so far this year. Reuters reports they are up to 10.86 million mt.

Much of the new supply is coming from Peru. Production is up over 50% in the first half of this year and Peru’s exports to China are up 95%. China’s refiners, meanwhile, are switching to this glut of concentrate supply rather than scrap and converting ore to refined metal at an ever increasing rate.

Output in August totaled 743,000 mt, an increase of 12.4% on last year. Year to date production is 5.5 mmt, up 8.7%, helped in part by London Metal Exchange warehouses in Southeast Asia, which are offering incentives to store metal with them that makes import, refining and re-export attractive.

In so doing, refiners avoid the 17% value-added tax hit on imports and the 15% tax hit on exports, Reuters reports. Warehouse incentives are reported to be around $65/mt may be in part contributing to a recent rise in Shanghai premiums to around $55-60/mt. Refiners now have the option to ship to Shanghai bonded storage — still counted as an import, strangely enough, as duties would be payable on it if it were cleared for home use. According to the official figures, then China is importing record amounts of refined metal but is, itself, the largest supplier of that metal. And it’s exporting record amounts of metal to regional LME destinations. Confusing, isn’t it?

Inventory in Shanghai and regional Asian LME warehouses has been rising and, however the market may perceive the bullish volumes, the fact remains China is awash with copper and, increasingly, so is the LME system. That suggests the price will struggle to make much further headway and, sooner or later, gravity will assert itself and we will see a softening in price.

PREVIOUS POST:
Precious Metals’ Appeal Wanes as the Dollar Strengthens
NEXT POST:
What Trump Trade Talk Should Focus On: Our Charts of the Week